6 Takes is the digital adaptation of the card game known as 6 Nimmt which weirdly enough translates from German to 6 takes. It’s a card game from the designer of one of my favourite physical board games called El Grande, and maintains the same simple game play but frustrating decision making that has become synonymous with Wolfgang Kramer’s designs.

The aim of 6 Takes is to have the lowest number of bulls at the end of the game, which will last either 1 round or until one player reaches 66 bulls depending on whether you choose a short game or a long game in the menu. Gameplay is simple, on each turn all the players simultaneously choose a card from their hand of 10 cards, each of which has a number on from 1 to 104. These are then shown to all of the other players and beginning with the lowest number the cards are added to one of 5 columns. The only placement rule is that the cards must be placed in the column in which they are a larger number than the last card played into the column and must be placed in the column in which they are the number closest to.

Should a card being placed cause a column to have 6 cards in it then the player who played the 6th card must take the previous 5 cards in that column, hence the name 6 Takes. The number of bulls on the top of each card taken is then added to their total and the game continues. Should you be unable to play a card higher than the last cards in any of the 5 columns then you are able to play a card lower, choose which column you wish to take and then replace the column with your lower card, all the while adding the bulls you have taken to your score. Repeat this process for all 10 cards in your hand and tally up your score, the player with the lowest score either at the end of the round or when any player reaches 66 points is the winner.

6 Takes at it’s core is a game of probabilities and gambling. What are the odds that your opponent has the exact card in between the your number and the number of the only column which won’t cause you to take all the cards, do you gamble that you will be safe or do you play lower, taking guaranteed bulls but stopping you hitting on that high scoring row? It’s a numbers game that doesn’t require any maths and for that we applaud it. Thankfully 6 Takes is a game of feeling it out rather than figuring it out and so the playing field is levelled; because of the nature of the simultaneous play there’s only so much planning you can really do before the whole landscape is changed before your very eyes. It’s this quick and frustrating decision making which has made 6 Takes (or actually 6 Nimmt in our physical copy) a go to game for my friends and I, either at the pub or after a dinner party, it’s a low barrier to entry card game that is a tonne of fun.

Where as 6 Takes might look good on your device, it is this speed of play and decision making which it struggles to replicate. Yes the game is bright and the controls are intuitive however it’s the small and slow animations between each card being turned and placed which slows the once quick game down to a plodding pace, and that’s just against the AI, don’t get me started on the pass and play multiplayer. While this doesn’t mean 6 Takes is a bad game by any stretch of the imagination, it does hamper my enjoyment of the app compared to the physical version of the game, if you aren’t accustomed to the lightening quick rounds of 6 Nimmt then this may not be an issue for you however for me it meant 6 Takes was a fun novelty but not one I go back to often.

A single player game can be played against up to 4 AI players with 3 difficulty levels over either a 1 round game or up to 66 points. The AI is challenging especially against the hardest level which is a real saving grace for the game. 6 Takes shines the more players you include so I always play with the maximum number of players possible, it leads to a lot more bulls taken but adds to the chaos. The app also includes a fun game variation in which players take it in turns to select their 10 card hand therefore knowing what they have to play as well as exactly what cards their opponents have. It adds a wonderful tactical element to the game and is enjoyable if a little tough, a very welcome addition to the app.

As I mentioned previously, multiplayer is available via a pass and play option but it is so slow I found it simply unplayable. It’s tricky to implement a game in which players play card at the same time when you are having to pass a device around. Turns take far longer than they should as you wait for the device to come back round to you and for all of the cards to be revealed. I did enjoy the presentation of this pass and play, each players hand appearing the correct orientation without the need to rotate the phone is always a nice touch and one I wish more games would use.

All in all 6 Takes is a fine implementation of the physical card game, it has all of the elements you would want, added game variations and a polished finish however for me it lacked some of the magic of the original game mainly due to it’s slower gameplay compared to the lightening quick card game. Having said all this I don’t want you to go away thinking this is a bad game, it really isn’t, it’s a light pick up and play app that will appeal to anyone with a gambling streak in them and is quite frankly a card game that doesn’t suck. While the app is good I just wholeheartedly recommend you pick up 6 Nimmt as a physical game and bring it out with a group of friends and see how it compares, I think you will see what I mean when you do. 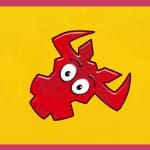