Can you out duel your opponent or will you be left wondering what went wrong?

7 Wonders Duel is the 2 player variant of the popular card drafting game 7 Wonders. While you are able to play the original 7 Wonders as just 2 players within the board game app, 7 Wonders Duel streamlines the game and properly balances the mechanisms so that a 2 player game can be played within 5 minutes and the card drafting doesn’t become boring and predictable when passing the hands between only 2 players.

As with the original game 7 Wonders Duel sees you drafting cards and collecting sets which contribute to your final VP score. The player with the highest score will win the duel. 7 Wonders Duel also adds both a military track and a science track, arriving at the end of either resulting in an end game win condition. This means you are now having to balance both VP collection as well as managing this tug of war style tracks to ensure you aren’t beaten before you can finish the 3 rounds the game is played over.

Unlike the original 7 Wonders Duel amends the drafting mechanism, removing the take one and pass it on move and replacing it with a draw a card from the tableau. The fact that some of the cards within the tableau are hidden behind others and only become available once the cards ahead have been drafted adds a level of strategy to the drafting. This change also means that unlike playing 7 Wonders as a 2 player game where you are selecting from all of the available cards you can find yourself unable to draft a card which is playing into your strategy and run the risk of opening up cards that will help your opponent. This is a smart way to deal with what is a clear problem with 2 player games in the original 7 Wonders app.

The art style and iconography is a continuation of the tried and tested 7 Wonders world, with a lot of the cards remaining the same. The introduction of new cards and wonders adds much needed variety to the game and while the iconography can be difficult to understand on first glance you are able to hold your finger on any card and it will provide you with an explanation of what the card means. The interface is slick and simple and although the art style is not to my tastes or ground breaking, it is still in keeping with the physical games design.

7 Wonders Duel offers online multiplayer via a real time lobby only and so you are unable to enjoy an asynchronous game with your friends which is a disappointment however it does have local pass and play multiplayer which the game lends itself to very well. Single player is via quick matches against an AI. There are no variable difficulties for the AI and I found it to be far too easy to beat which began hampering my enjoyment of the game as a single player experience. After I had established a strategy to win I found that I would win every game without deviating from this strategy.

After waiting so many years for 7 Wonders to arrive on our devices it’s great to see 7 Wonders Duel follow so quickly. The game is as polished as you’d expect and gameplay is swift and scratches that 7 Wonders itch in about 5 minutes. It’s a great introduction for anyone wanting to learn how to play the duel variety of 7 Wonders but the lack of challenge from the AI means that after a month or so on my phone I removed it pending an update to increase the difficulty as it seemed I was simply going through the motions.

Some recent updates over the first few months of release of 7 Wonders Duel made me revisit my original review. The addition of some tweaks to the AI in terms of difficulty and also the addition of leaderboards and tables to keep track of your results have made 7 Wonders Duel as much more fun game to play, it’s more challenging and the ability to track how I’m performing are welcome additions. As such I have raised my original rating of 5.5. 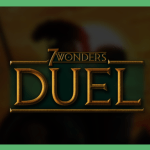