After such a long wait for 7 Wonders to arrive on our mobile devices was it worth the wait or will you be left wondering what all of the fuss was about?

7 Wonders is a card drafting game that is considered a modern classic of the genre. Players draft cards to add to their cities, build their wonders, all in the search of the illusive VP. The game unfolds over 3 rounds, each of which adds new more powerful cards at the beginning of the round some of which depend on the cards you have played in the previous rounds. A turn in 7 Wonders sees all players drafting a card from their hand and then passing the hand onto the next player. Selected cards are then played into each players cities or added to their unique wonder, with the relevant costs paid and then coins and points are given based on the drafted card. This repeats until there are no cards left in the hands at which point bonus points are awarded based on the volume of military shields relative to your neighbours and then it’s on to the next round. At the end of the 3 rounds VP are awarded based on the cards in your city, sets collected of certain cards, VP on your wonder card and military conflict and the player with the most VP after all of that is crowned the winner.

That is very much a quick overview of how 7 Wonders plays, the depth of the game comes in the wide range of cards available to you all encompassed in a take one and pass it on mechanic. Because VP can be achieved in such a variety of ways the strategies for winning are endless and the need to combat your opponents hunt for VP is apparent from the off. Collecting too many of one type of card can see you allowing your opponents to build up an unassailable lead elsewhere. 7 Wonders is a game that rewards paying close attention to your opponents while trying to concentrate on your own strategy which is just one of the reasons it is considered a modern classic board game and why it was an obvious port to a digital board game.

Presentation for 7 Wonders is a mixed bag for me, menus and artwork all look great however the real problem, which was always going to be the case, is the varied and often complex iconography on each card. With so many different cards on you tableau at any one time it can be difficult to see at a glance what it is you have collected. Add to this the fact that your opponents collection are shown to you even smaller and you will be forgiven for struggling to understand what is going on until you become a more seasoned 7 Wonders player. Each card has a wealth of information on it, be it the cost to place, the effect or any past dependencies or future dependents and so displaying all of this information as well as the artwork is always going to be a challenge. Aside from the difficulty seeing and processing all of the information on the game board the digital version of 7 Wonders ports the physical version of the game well.

7 Wonders provides the options for online multiplayer, live as well as asynchronous for up to 7 players. I’ve generally been able to find any sort of game I want within a reasonable amount of time and enjoy the live multiplayer more so than the far slower paced asynchronous multiplayer which 7 Wonders doesn’t really lend itself to. There is no pass and play option available which while I understand due to the nature of the simultaneous take one pass it on gameplay I think there are plenty of ways around this to allow pass and play to be included. For someone who often plays digital board games in places without internet access, having a pass and play mode means I am able to include others in some of my favourite games and so am disappointed whenever this is not available.

Solo play is available against up to 7 AI opponents, none of which have varying difficulty levels. Despite this I have actually found the AI to be both challenging and consistent in their gameplay and I am punished for making poor decisions and am not guaranteed a win should I make strategically sound ones. The options to increase the longevity of the game are reasonably good, differing the number of opponents all the way up to 7 changes the game and the strategies with each added foe; the fact there are 7 Wonders to choose from to build, each with 2 versions means there are a good variety of goals in each game. Not only do you have these options but the game has 2 available expansions, Leaders and Cities, both of which add additional wonders to choose from, but also new gameplay mechanics. Special mention should go out to the Leaders expansions considering that I now consider it a must when playing 7 Wonders as it adds to the game in such a positive manner. All told there is so much content and options available to you in the app that I can see it being a mainstay on your device for a long time to come.

The development of 7 Wonders was a long and protracted one, it followed delays, long periods of inactivity and more delays however now that the app is finally here it is overall a success. The physical version of the game has been a perennial favourite and the app version is no different. While the game might look daunting and confusing at first glance, the gameplay itself is reasonably simple and it leaves you with a package which is easy enough to pick up and play in 10-15 minutes but in depth enough to still be fun when you’re on your 5th game of the session. 7 Wonders is a good port of a great game and one we’d recommend finds its way onto your device, especially with the addition of the Leaders expansion. 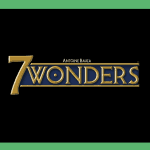