Does this digital port sow the seeds of the great game or does it leave you hungry for more?

When I tell you that Agricola is a heavy euro farming simulator you might be completely put off and understandably so however it’s a classic for a reason and therefore it’s no surprise to see it make the leap onto the digital tabletop (despite it taking it’s time to finally hit Android devices earlier this year).

Agricola is a quintessential worker placement game that sees you building up your farm and your family over the course of 14 rounds. The thing that makes Agricola so popular is also the thing that makes it do difficult to summarise the rules concisely for you here, and that is the open nature of the game. You can utilise your worker to gain resources, build structures, improvement (both major and minor), plough and sow fields, gain animals, upgrade your farm, have children and many more things to boot. How you build your farm and thus how you garner victory points is up to you; should you want to be a sheep farmer in a wooden hut you can, similarly if you want to be an organic vegetable farmer in a stone house with a large family you can do that too. Each method has it’s pros and cons and thus finding your route to victory takes careful consideration.

What makes the gameplay of Agricola such a challenge is how tight the worker actions are and how little you can get out of them. Because the game is so open you simply can’t do everything you want and starting the game with only two workers means that you are rushing to try and get your farming engine built while also trying to increase your family size and therefore increasing your number of actions. The more you increase your family the more mouths you have to feed and therefore the bigger the farm you need to feed everyone, and so the cycle goes. It’s this constant battle for food over family size that is at the crux of Agricola strategy, increasing your family will mean you are able to do far more on your turn and therefore sow, plough and harvest your fields however also adds up to more mouths to feed, the result of not doing say leading to minus victory points at the end of the game.

After 14 rounds, points are awarded for buildings, farm squares utilised, resources, food and animals, improvements and any points mentioned on occupation cards. Minus points are also applied for unused farm, farms without a range of animals or food stuffs and any unfed worker tokens collected throughout the game. These are all tallied and the player with the highest number of points is crowned the best farmer and wins the game.

It’s not a game for the faint of heart or for players who enjoy their games on the lighter side of the spectrum. Agricola is a test of turn optimisation and forward planning and is so tight it can often see you derailed by being blocked out of a certain move by an opponent forcing your to zig zag around trying to achieve something rather than see your entire farm collapse. For newer players there’s a lot to take in and it will definitely be a few games before you can start to figure out what works and what doesn’t as well as doing anything other than fumbling around the board trying to figure out what to do.

This is one area that the app version of Agricola doesn’t help new players a lot. While there is a reasonably in depth tutorial which goes over the actions as you play through a game I felt that it didn’t do a good job of explaining how a turn, round or game plays out to give beginners the confidence to start a game and do anything other than attempt to replicate the exact moves they saw within the tutorial. There’s no discussion within the tutorial of some of the key elements of the game and I finished it feeling like I wouldn’t know where to start had I not had experience with the physical game previously.

In addition to the tutorial the user interface for the Agricola app makes play difficult and unintuitive. Available actions are represented by icons which are small and hidden amongst the farmyard style art, clicking on each or the ? symbol provides the name of the action however there are far too many times when I needed more information about the action specifically; the ability to see the cost of a building, being able to see the information and cost regarding improvements directly from the action screen were all missing. This meant having to select the action and undoing it multiple times a game to be able to see the necessary information I wanted. Add to this the difficulties I had placing fiddly fences as well as far too often dragging and dropping my workers on the action picture only to find that I hadn’t dropped them on the specific place on the picture that actually triggers the action meant that I was left a little confused and frustrated by some of the design choices for the game.

I did think the app version of Agricola did handle the large sized boards well even on smaller devices, allowing for players to toggle between their individual player board as well as scrolling along the shared actions board. With so much information to fit onto a mobile phone I’m pleased to see they didn’t try to cram it all onto one screen. As well as this good design the app does a fine job of using the art style that is present in Agricola, whether you love it or hate it, it’s at least a faithful representation of the physical game and evokes the same feelings of playing on the app as it does on the board itself.

When it comes to play options this adaptation is a mixed bag; it has both offline and online multiplayer as well as a dedicated solo variant which are all great to have, especially a solo mode that is not simply playing against an AI. Where the app is lacking is in some of the more popular advance rule options (which are mentioned within the in app rule book, but are not actually options within the game) such as the draft rules and the 10-3 rule, both of which vary the starting set up for the game and are rules which I use every time I play the physical version of Agricola. Seeing them within the rule book but not in the game is a shame but hopefully something that may be added in the future.

Solo players can play against an AI of up to 3 levels of difficulty which range from pretty easy on the early level to a nice challenge at the hardest setting. New players will find this AI a good learning curve for them and they act as a great way to gain experience in the game while you try and suss out what works and what doesn’t. In addition to this the solo variant (which is also present in the physical game) sees you attempting to optimise your score over a series of solo games with some minor tweaks to the rules. It’s a nice addition always to see a dedicated solo mode and so I was pleased to see this included within this app. Multiplayer options range from local pass and play to online play and run smoothly and seamlessly in both.

Truth be told, I have been waiting for a long time for Agricola to become available on Android devices having seen it released for a few years on iOS and so when it finally came out I was excited. However upon playing it a bunch I’m a little disappointed. Not in the gameplay itself, this is a tight and tricky a game as you see, it’s a classic Euro game experience on my phone which is why I love the digital tabletop so much. Where I’m disappointed is in how challenging I found the game to navigate and play because of minimal information on screen and missing game options within the app. I can only imagine how hard it would be for someone with less experience of the game to pick up the app and learn what is going on and where everything is, in fact players moving from the board game app version of Agricola to the physical version will likely be amazed at how much clearer and easier everything is to see, locate and understand, and this is frankly the opposite way to how it should be.

The game Agricola is great, I love building my farm, expanding my family and wracking up points. The app version of Agricola is good, it brings the game to my mobile phone and lets me scratch the itch for playing whenever I want and while I think it’s a boardgame app I think people will enjoy it’s one I wouldn’t recommend for beginners and one that you have to dedicate time to figure out. 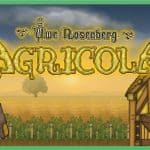