Are there enough words to describe whether Avowel is any good?

Right off the bat I think it’s best to clear up any confusion, Avowel is the official and endorsed digital adaptation of the game Wordsy; the game’s designer Gil Hova is involved along with Wheeler Games to bring Wordsy to our devices, albeit with a new name due to Wordsy already existing in the Play Store.

Now we’ve got that sorted we can get on with the review. Avowel is a word game which pits players against the clock and their opponents to come up with a word containing as many letters from the grid of 8 consonants as they can before the time runs out. The grid of 8 letters are given varying points based on how far they are to the left and so using letters from the grid on the far left will garner you more points than using those on the far right.

It sounds similar to loads of word games you’ve played before however the beauty of Avowel is that you are no limited to using only the letters available on the grid (like you are in games such as Scrabble or Boggle), you are only limited by your own vocabulary as well as your ability to see the words.

It’s a devilishly simple game but one that takes a few plays before you get into the mindset and a couple of days of play before I felt like I was both competent and had also built up enough of a regular Avowel vocabulary to deal with a tricky grid of letters (disacknowledgements is my gift to all of you who go on to play this game).

Bonus points are available for the player who has the highest scoring word at the end of the timer and should there be a tie they are awarded to the player who took the least amount of time to submit their word. It makes for a wonderful feeling of “is this word enough” as you want to submit something before your opponent but also want to make sure it’s scoring enough points to beat them or at least equal their score. It’s a nice little balancing act. After 7 rounds of every changing letters each players top 5 scoring words including any earned bonuses are totalled and the highest scorer is the winner.

Presentation wise Avowel is not going to blow you away however what it does do really well is carry a theme of a book throughout, backgrounds are textured to look like pages, the first screen is a leather looking front cover, there are page turning animations throughout and fonts used harken back to the classic age of real paper. For a game that sits firmly on the light side of the digital tabletop it simply doesn’t need a lot of the bells, whistles and animations you see from grander games, it’s clean and simple with consistency from it’s theme. One thing I will add on overall presentation is the choice of music used within the app, I’m in love with the soft elevator jazz track used within all the menus and genuinely feel tense with the music used within the game itself.

Avowel comes with a few play options, local play against AI of varying difficulty, a daily challenge and online play. Local play is where most people should start in order to get a grasp of how the game plays and what constitutes a good score and the AI is perfect serviceable on the higher levels; they produce high scoring words in reasonable times but thankfully don’t just immediately find the best word straight away.

While local play is a fine implementation of Wordsy it’s not going to keep you coming back to Avowel regularly, thankfully both daily challenge and online play do exactly that. Daily challenge mode sees users compete against the same 7 rounds of letters against a timer, your score is then added to a global leaderboard and you can see exactly how you fared each day as well as what the best words were each round. It’s a really fun 5 minute challenge each day that is insanely addictive.

Secondly is the newly introduced online mode. While Avowel itself is free (with ads) to download from the Google Play Store online play is available via a one off purchase which is worth the price thanks to what it adds to the game. You can create or join online games with strangers and friends utilising the variety of timer rules available in the game with up to 6 players. Once the game is filled each player plays using the same 7 grids of letters and scores and time bonuses are added and the highest scorer wins. Being able to play against your friends and strangers is what makes Avowel so much fun; marvelling as your friend plays a huge word of 20+ letters only to score the same amount as someone who uses 8 is fun to see. Online mode also gives me the opportunity to play Avowel in my new favourite way, using a 10 second timer. Having to rush out words in only 10 seconds brings a whole new level of panic to a round and one I’m sure me and my friends will have fun with for a long time.

Avowel joins a long list of word games that I have enjoyed playing, however thanks to it’s addictive daily challenge and fun online mode not to mention it’s attractive 5 minute play time means it is also part of the short list of word games that has remained on my phone and gets played regularly. A good app that’s available for free but one that rewards the purchase for online mode. 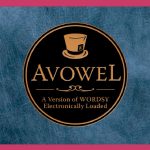