Is this adaptation of a dice rolling game a home run or does it strike out?

Bottom of the 9th is a baseball themed dice rolling game, it incorporates bluffing, dice rolling and player powers to guide you through the final innings of a tight baseball game. If you’re like me, a person from the UK with no real knowledge and understanding about baseball you could be forgiven for asking whether Bottom of the 9th is a game which you should bother with. It’s so heavily dripping with the baseball theme that it can be hard to navigate if you have no idea what’s going on however with a little perseverance and thanks to a thorough tutorial there is reason to give it a shot.

You take up the mantle as either a pitcher or a batter at the end of the 9th innings of a baseball game (hence the name Bottom of the 9th). The aim of the game as the batting team is to score a run to win the game, and for the pitching team, getting 3 strikes, the first person to achieve this wins the game.

A turn plays out in 2 phases, the bluffing phase and the rolling phase, both of which differ depending on whether you are the batting team or the pitching team, but thankfully are both relatively simple. As the batting team the aim of the bluffing phase is to successfully predict which quadrant out of the 4 options the pitcher will choose to throw the ball, depending on how well you guess ie. if you guess 1 of the 2 axis or 2 of the 2 axis, you will earn powers to manipulate the dice in the rolling section. For the pitching team you are trying to bluff your opponent and throw in the opposite direction as they select.

It may seem as if this is shear dumb luck however the pitching team is handicapped in this phase. One quadrant of theirs is marked, for example the low inside quadrant, and therefore whenever they throw a pitch to a low quadrant they lose one stamina from their low pool, an inside quadrant one stamina from their inside pool, and if they throw to the low inside quadrant specifically they will lose one stamina from each pool. Should a stamina pool become depleted then a pitcher will not be able to utilise any quadrant contained in the pool. What this means is that as the game progresses the pitcher has less options and the batter can begin to guess exactly where the ball will be thrown and so increase their chances of hitting it out of the park and winning the game. It’s a smart game of cat and mouse yet doesn’t over complicate things too much.

Once the first phase is completed players roll dice we move to the dice rolling phase. The pitching team will roll their dice which dictates what the batting team is required to roll, be it a higher or lower number or a number equal to the dice the pitcher has rolled. The batting team will then attempt to roll their criteria and the dice are resolved. It’s all pretty simple stuff but it takes a bit of time to remember what the requirements on the dice mean, however the game does do a good job of reminding you throughout the game.

It’s during this phase of the game in which the players can manipulate their dice based on how well they performed in the first phase, and where we get to see the true power of the variable player cards you get to choose before each game. Different batters and pitchers have different ways they can change, reroll and flip dice to help you win the game and so it’s vital that you are able to win the first phase to give yourself the best chance when it comes to dice rolling. There’s nothing more infuriating in this game than seeing your opponent his a home run thanks to manipulating dice all because you ran out of stamina in phase one.

That’s a very rough guide on playing Bottom of the 9th, it’s a bunch of guessing followed by some dice rolling, but thankfully the in app tutorial not only takes you through all of this but does it in a very thorough way so I recommend you start there.

When it comes to presentation for Bottom of the 9th doesn’t hit it out of the park but it doesn’t strike out either, it’s a solid hit to second base. Character cards are well designed and hark back to baseball cards from a golden age, they also thankfully include both male and female characters which is rare and very welcome in a sports game. The game itself takes place on a 3D baseball field and there’s nice touches such as meeples in the crowd. On the bad side, some of the 3D models, specifically the meeples used for batters and pitchers are a bit clunky and don’t really work for me. I see why Handelabra made the choice to use meeples in this way however they’re all a bit blocky and inflexible and stand out to me but not in a good way.

You can choose between single player games against 3 levels of AI being either the batting team or the pitching team, or multiplayer pass and play as well as online matches. The AI are solid and can be punishing on the higher level but make for a fun game. There are online leaderboards for you to challenge which is always a nice addition to a game for someone like me who enjoys stat chasing.

The big question for Bottom of the 9th for me is whether there is enough in the gameplay to entice someone who is not a fan of baseball, and that still is a question I’m struggling with. If you’re a fan I can see that there is plenty here to keep you coming back to play; the interesting characters and the unusual game mechanics provide some fun moments, especially during my pass and play games, and the classic feel that the team at Handelabra have brought to game all mean that I can see the appeal for people. However coming at this game from the point I do I’m just not sure there’s enough there in this light game to keep me coming back for more. There’s plenty of dice games that, while maybe don’t score as highly as Bottom of the 9th does, keep me coming back more because they suit me better (Qwixx, Ganz Schon Clever) and the theme resonates more with me however you’re a baseball nut then Bottom of the 9th is one to pick up for sure.

Bottom of the 9th 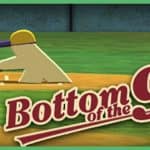