Should you bother even going down this road with Carcassonne or should you put up your walls to this classic board game adaptation?

Carcassonne is one of the most popular board games of the modern era. It truly made the leap from a game for the hobbiests to the mainstream and you can tell by the shear volume of expansions, new versions and adaptations of the game which are on sale in shops across the world. It should come as no surprise that a digital version of the game would be one of the most downloaded digital board games out there.

For those of you who don’t know, Carcassonne is a tile laying and worker placement game where each turn a player has one tile which they must put into the shared tableau. Each tile has at least one of three possible elements on them, either a road, a city or a monastery. The tile is laid, matching one of the elements to another already on the tableau and the player has the option to claim one of these three elements or to claim the ground surrounding them which is referred to as a field using one of their limited supply of meeples. Points are scored based on completed roads and cities, surrounded monasteries or the number of completed cities within each field. The challenge comes from the fact that your limited number of workers can be quickly tied up in uncompleted elements and so you have to balance spreading your workforce too thinly on large projects while still collecting valuable points.

That is the crux of the game Carcassonne, the rules and play is simple to understand, take a tile and place it before deciding if you want to claim an element; rinse and repeat. The simplicity of the base game really is the reason for it’s commercial success however the tactics involved in deciding which element to claim, how early on to claim a field (which are only scored at the games end thus tying up your meeple till the end) or how you can hijack an opponents city or field by trying to outnumber them. There is enough tactical depth to keep even the most hardcore board gamer interested and that is a hard thing to achieve in such a gateway game.

Carcassonne looks good with it’s 3D board and simple animations. It’s the nice touches like the flags being raised upon completing a city which make the game feel more polished than previous versions of Carcassonne on Android and iOS. The controls are simple and intuitive with a basic drag and drop doing most of the work here. There are additional presentation options you can toggle on and off which help newer and older players alike take some of the guess work out of scoring. Toggle on or off the hash markers for the fields will let you see immediately who controls which area (the part of the game newer players have the most difficulty understanding). See which areas are now dead as no tiles remaining will fill the spots with a simple toggle. Touches like this make the game easier and quicker to play which is always welcome in a board game app.

Multiplayer is handled both online via either live games or asynchronous play or by pass and play on a single device. Thanks to the popularity of Carcassonne as both a game and an app there is always a good number of multiplayer opponents available at all times which can’t be said for all board game apps. Single player can be played against up to 5 AI players which have various traits rather than difficulty levels. For a game as simple as this I am a fan of this method of AI rather than varying difficulty levels. Being able to choose how the AI will approach the game, be it an aggressive expander looking to hijack your properties or a quiet neighbor concentrating on their own points rather than focusing on yours, gives you plenty to think about and options for the style of game you want to play.

The AI is a nice challenge and is not bad, it has a tendency to not utilise fields which are generally the big scorers in Carcassonne, and can fail to use some the special features present in some of the expansions.

Speaking of expansions, Carcassonne has a wealth of them available via in app purchase which add new elements to the game. Currently there are 5 expansions available (The Abbot, The River, Inns and Cathedrals, Traders and Builders, Princess and the Dragon) as well as an adaptation with it’s own expansion (The Winter Edition and the Gingerbread Man). Once bought you can start a game with any or all of these expansions which gives you even more options for play and change the tactics of the game. These are a real plus for the app and I recommend most of these if you enjoy the base game.

Carcassonne is a classic game for a reason and this adaptation really does it justice. It’s fun to play and the wealth of expansions keeps gameplay fresh even after many replays. The game is only mildly challenging but remains fun, slight improvements in the AI’s ability to handle fields as well as speeding up their decision process slightly would be the only real improvements we would look for but that aside it is a worth purchase and worth the money for sure. 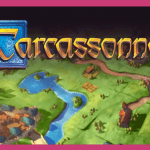