Will this castle building app have you leaping with joy or drive you absolutely mad?

Castles of the Mad King Ludwig is a tile laying app that sees you building up an often strange and sprawling map of a castle; made up of rooms of varying shapes, sizes and uses. Each room you lay down in your castle provides you with victory point in a number of different way; you get points for simply placing a room, based on the room type you may get points for neighbouring rooms, you may get points for completing a room, which is to say attaching every single doorway on that room to another room, staircase or corridor and finally points for completing any of the public, or private objectives (however these won’t score until the end of the game).

Careful consideration needs to be take when placing and completing rooms, with victory points available for the type of room neighbouring and bonuses for completing rooms can lead to some nice chain reactions that can result in huge points swings. A room that gets additional points for having neighbouring sleeping areas which also gets rescored once it is completed can pay off double, where as rooms which when completed give you the option to take an additional private bonus card can see you rack up points behind closed doors and finally unveil a winning position without anyone suspecting.

Rooms are purchased from a shared store with 5 slots of increasing prices, the twist is that one player each round, the master builder, decides which of the 5 random rooms sits in each slot thus setting the prices for that round. Each player takes it in turn to pay for a room with all of the money going to the master builder. Do you make rooms affordable for other players so that you can guarantee they purchase one and fill up your coffers or do you price them out of the market for a room you desperately need but run the risk of them passing their go and not providing you with the vital income you need, that is the question that befalls the master builder each round.

In addition to this economy of rooms, Castles of the Mad King Ludwig is won and lost in the public and more often than not, private objectives. These range from the player with the most number of round rooms in their castle to those with the highest square footage of a particular room type. Collecting additional private objectives by completing utility rooms can give you loads of additional victory point however you’re at the mercy of the card draw which can see you drawing objectives you currently have no points for, it’s a high risk high reward strategy that often pays off big.

That covers the basic rules of Castles of the Mad King Ludwig, buy some tiles, place some tiles and hopefully win the game. The rest is a wonderful duel of price fixing and game theory.

The digital adaptation of Castle of the Mad King Ludwig matches the art style of the original board game, with it’s top down 2D floor plan view and iconography. The design and user interface is similar to that of Bezier Games other offering Suburbia, a functional but not mind blowing game graphically. Everything is handled using drag and drop and as you select each room the game provides you with a visual aid as to where you are able to place it, this is great to see and takes the guess work out of placing tiles on the board.

One major positive for the presentation, and where the app version shines against the physical version of the game is how well it fits onto our screens. The original game is quite a table hog, as all players build their castles you can often find yourself having to slide whole structures around the table as you expand into other people’s area, off the side of the table or even fill the table completely on your own. This can make it a bit of a challenge at times if, like me, you have a small table for playing games and you play with more than 2 players. While the app version can’t fit everything onto a single screen, the ability to scroll around your castle as well as zoom out, makes it easy enough to plan and navigate without having to consider actually fitting it on a table.

While the digital version of Castles of the Mad King Ludwig does a good job on small screens it doesn’t come without issues. Firstly the iconography, while clearer on tablets, is quite small on phone screens; and although won’t be an issue for experienced players, may cause some confusion for newer players who aren’t familiar with it. Secondly, and most frustratingly, on my Android device, launching the game does not remove the on screen buttons that appear. This means that far too often when I try to confirm an action, expand objectives etc I find myself hitting the home button and exiting the app. This feels like a super easy fix however it is something that is a constant frustration when playing.

When it comes to game modes the Castles of the Mad King Ludwig app has only some of what you’d expect from a modern board game app. It has single player games against up to 3 AI as well as a nice campaign to work through as well as pass and play multiplayer on a single device. It does however miss any online multiplayer which I know will be disappointing for some. The AI has only one difficulty setting and is not something that I’ve found particularly difficult to beat but does play the game reasonably well so as to give me a good game.

The bulk of my single player experience came from the campaign mode which sees you building various castles along a road, gaining crowns by completing certain objectives. It’s not breaking new ground with campaign modes but it is fun and challenging enough to keep me coming back for more and a nice way of injecting some interest into a solo version of the game.

Overall Castles of the Mad King Ludwig is a fun and interesting adaptation of a board game that me and my board game group play regularly. Yes the AI isn’t the most challenging and the minor presentation issues mar the game somewhat, however this is outweighed by what is a good game and a solid adaptation. The decision from Bezier games to focus on the single player experience means that solo players will have plenty to come back to this app for but it may alienate players who use board game apps to connect with friends across the globe. For me however, this isn’t an issue and the fact there is a pass and play mode means there’s plenty for me in this app. For people who want a medium weight tile laying game then Castles of the Mad King Ludwig would be a great download for you.

Castles of the Mad King Ludwig 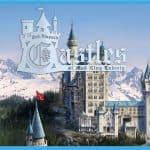