Will this adaptation of Charterstone leave a lasting legacy or will it be put back on the shelf?

Initially you may look at Charterstone and see a simple worker placement game; a genre I’ve covered here quite a lot (see Raiders of the North Sea for example) however it’s only when you dig a little deeper that you realise Charterstone is a legacy game and so now we’re in a totally different ball park.

For those of you who don’t know, a legacy game in the physical world is one in which as the game goes on you permanently change the board, the rules, the objectives and the players in a way which is completely unique for each group of people playing. Changes you make in your game will look completely different to changes made in someone else’s version of the game. This can be driven by story elements, random chance or player choices and it makes for a fun and fascinating unravelling of a board game.

Charterstone sees you attempting to build up your city (referred to as a charter) by adding buildings, each of which provides you an opportunity to place a worker, pay the cost and gain the associated action. New buildings are unlocked as you play the game and your strategy when building up your charter will evolve as new information and opportunities present themselves. As a legacy game Charterstone plays out over a campaign of 12 games, each of which adds new rules and win conditions as well as bonus points at the start of every one of the 12 games. Your charter remains a constant throughout the campaign so buildings purchased in previous games will be available for you from one game to the next. In addition to your charter, your character is also levelled up by the player providing you with the ability to carry over resources, money or additional items from one game to the next, where normally you are required to discard them. Exactly which you decide to upgrade and which you decide to carry over is each players own preference.

As with any worker placement game, building your engine to maximise your turns is key and Charterstone offers plenty of flexibility to do this. The volume of buildings available is huge and the fact that you will encounter a completely different set of buildings from one campaign to the next or based on which starting character you choose to manage means that Charterstone offers a legacy experience that, while becomes less surprising with each play through, still provides a varied and fun campaign even if you have seen the story before.

Players take it in turns to place a worker on one of the buildings in the game, be it one in their own charter, one in an opponents or one of the common shared buildings; paying the required price be it money, resources or one of their limited resource supply and gain the benefit. The buildings at the start of the game are very much what you’d expect from a worker placement game, convert resources into money, money to resources, build new buildings, complete objectives or move your token down various VP tracks.

You start the game with only 2 workers and retrieving them will cost you a turn and as such smart decision making on where to place your workers is key especially in the early stages of each game. Wonderfully though should you or your opponent place a worker on a space on the board already occupied then the previously placed worker will be returned to that players hand, setting up an interesting game of cat and mouse as you attempt to place your workers in buildings which are both useful to you but also likely to be used by your opponents so you can gain your worker back without having to utilise a turn in order to retrieve them.

A game with continue until an influence track is advanced 25 times via various actions taken throughout a game at which point the winner is decided based on the highest number of VP collected after all of the objectives, bonuses and special rules have been applied. End of game upgrades are decided by players and you’re onto the next of your 12 games in the campaign. It’s an addictive and satisfying way to play a game and one reason why legacy games have become so popular in recent years.

There you have the very basics of Charterstone, I’ve been as detailed as I can be without giving away any of the secrets you’ll be unlocking as that’s for you to find out and part of the magic of a legacy game. The question is, how does a digital version of a legacy game work when you don’t have all of those fun physical boxes to open and new stickers to put onto your board and once you’ve discovered them all are you left with a game you actually want to play again, does the digital edition make a good adaptation?

We’ll start with my impressions of the game as a whole as that’s the easiest place to start. Charterstone: Digital Edition has the exact look and feel of the physical game, the artstyle is cute and cartoony and is a replica of the original. Iconography is large and clear and keeping track of everything is easy thanks to a well thought out display and the fact nearly everything is expandable via clicking. One challenge the designers had was being able to fit what is not only a large board in the original but all of the additional cards and opponent information that is found in the game. While they have been reasonably successful with this there are some areas which, while fine, could be handled differently to improve the overall experience.

Firstly due to the large map and the even larger artwork for each building, you are not able to get a complete overview of what is going on in the game, what buildings are available to you and this makes it easier to miss what an opponent is building up in their charter as well as disregarding some buildings altogether due to never scrolling to that area of the map. The ability to get an overview at a glance would resolve this issue and give you more of a feeling of a competitive game rather than a solitaire feeling as you focus on your own charter.

Secondly, and far less importantly is keeping track of the progress of your opponents. Each Charterstone campaign features 6 players, be them human or AI and their progress is displayed on the left of the screen in information boxes. The current VP total, number of workers, resources, money are all displayed here and with that information you can make informed decisions about you best move. However due to the size of these boxes the game can only display 3-4 of them at one time meaning I am forever scrolling up and down this list in order to keep tabs on players. It’s a minor frustration and not a deal breaker for an otherwise beautiful looking app but worth noting, especially as you will be playing at the very minimum 12 games of Charterstone.

Animations are simple and cute and thankfully fast. Although you always play with 6 players it never feels like you are sitting around waiting forever for a turn and yet can see everything that is going on with your opponents so you don’t miss a trick. The game not only highlights moves available to you but gives explanations as to why you aren’t able to take certain actions which is a nice addition compared to the normal no without a reason you often find in games.

Charterstone: Digital Edition gives you the option to play a campaign online with up to 6 players, a combination of AI and humans as well as a local campaign so you are never short of an opportunity to play, and it is in these multiplayer campaigns against human opponents where Charterstone really shines. Seeing the diverging paths of each of your friends and how they have set about building their charter makes for some fascinating interplay however spread across 12 games of the campaign this gap between player choices gets far closer, there’s rarely a sense that you’ve strayed too far from the norm.

The AI have various difficulty settings and while are sufficient for you to be able to enjoy a game with them on the hardest level, there’s no substitute for human interaction in Charterstone. With that being said, don’t be afraid to start a campaign utilising some AI if you can’t fill every charter with your friends, the AI will do a fine job of filling in for you.

The longevity of Charterstone is helped greatly by the volume of cards and crates you have to open, so much in fact that you won’t get anywhere near opening them up in one campaign and so when you play your next one you’ll be seeing a whole new bunch of buildings and treats. One feature which is a great addition is the ability to save a map for play as a single stand alone game. Being able to use your favourite map again and again even once you have finished the campaign means that you can enjoy the challenge of Charterstone without having to commit to an entire campaign.

So how well does Charterstone fair as a board game app? Well it looks great and plays quickly and easily, the options for single player, multiplayer, campaigns and one shot games are great and give you plenty of ways to play the game. It’s a great adaptation of the physical version of the game and the legacy aspect works well despite being in a digital form, which was a concern I had before starting the game; opening up crates and being able to read through the cards from not only your crates but every time one is opened gives you a similar feeling as the one you get from the physical game.

My one issue with Charterstone lies not with the app itself but with the game as a whole, and that’s that as a legacy game it’s not that exciting. The story just doesn’t have the same twists and turns as I’ve come to expect from playing games such as Pandemic Legacy. At no point did I have a wow moment as I opened up a previously unseen crate, or did a rule change massively impact how I was going about my game. It’s a fun and light worker placement game which I enjoy and would happily play through again however as a legacy game I found it a little on the uninspiring side.

With all of that being said, would I recommend Charterstone, absolutely! The fact that we’re now seeing a legacy game on our mobile devices is fantastic and although I found it less exciting than other legacy games that simply won’t be an issue for a lot of people who haven’t played others. For a first foray into legacy gaming Charterstone is a perfect app for you. Enjoy building up your city game after game and see if you can unlock all of it’s secrets. If you can find 3-5 friends to play with regularly you will walk away happy. 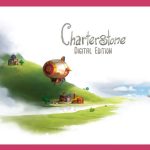