Paying to get the app version of Colt Express, is it worth a purchase or is it daylight robbery?

Colt Express was the 2015 Spiel des Jahres winner which means two things for a board game, it’s lightweight and it’s fun, so it’s no surprise that there is a digital board game version for us to try our hand at a little light train robbery.

Colt Express is a turn management game which pits up to 6 players against each other as they attempt to steal the most amount of loot from the train and often each other. The game plays out over 5 rounds and takes at least 15 minutes and upwards of 30 minutes with the full complement of 6 players. Each round consists of two phases, the first being where players play the actions they intend to make; dictated by a limited number of action cards in their hand. These moves are added in turn until all players have made the required moves for the round. Phase two is what makes Colt Express a far more interesting game than most, because it is only once all of the actions for all players have been made that the actions are undertaken. What this means is that you can potentially have to be looking 5 moves ahead for the round, not only planning what you will be doing but also anticipating what your opponents will be doing. Far too often we find ourselves alone in a rail carriage attempting to punch an opponent who had moved away the turn before, all because we forgot the action they had played. It makes for a frustrating but fun game. Spanners are thrown into the works thanks to various modifiers on how the action cards are played in each round, whether some are being played blind or the order reversed for the final card of the round. You also have to deal with a gun toting Marshall and easy firing opponents filling up your action deck with useless cards. Despite having to consider all of these things the gameplay remains lightweight and simple to figure out.

One of the defining characteristics of the physical version of Colt Express is that the board itself is a 3D model of a train with action taking place inside the cabins as well as on top of the carriages. When you see the game on the table you are immediately intrigued as it is an unusual sight to see a game take place on a board that isn’t flat. This was always going to be a challenge when porting the game into a digital format and while we lose the 3D board I am pleased with the cell shaded art style that they’ve gone with here, after all, if you can’t go 3D why not go completely the opposite and have everything intentionally flat looking. Aside from the lack of 3D board, I like the character design for each of the bandits and the bright colours and simple animations which the designers have gone with, this is one of the better looking games in my opinion.

While the tutorial explains the cards you will be seeing throughout the game, there are no words to be seen on each card to jog your memory of what actions they represent. Add to that the fact the game insists on displaying them fanned as you would a real hand of cards you can be forgiven for being a bit confused as to what you are actually holding in your hand.

Multiplayer is handled by online ranked matches, however in my experience matches to join are few and far between so I’ve not had as much success online as I would have liked. Aside from online there is no local or pass and play option for Colt Express which is a huge oversight and a massive flaw for this app. One of the great joys of Colt Express is the ‘gotcha’ moment when you raid an opponent and get away leaving them to waste actions on loot you have already taken. Seeing the realisation from your foe dawn on their faces that the next 5 moves for them will be pointless is something I enjoy seeing and there simply is no way to get this from the app. As much as I’d like to pull my tablet out around the table at a pub and fire up Colt Express I simply can’t. Aside from multiplayer you have the option for solo play via a one off classic game or by playing through story mode. Story mode consists of 5 games per bandit each with varying challenges and winning conditions which add some nice variety to the game and allow for some interesting games.

Colt Express looks great, it plays well and is a lot of fun. The story mode will keep you going for a while however the lack of online user base coupled with the nearly unforgivable lack of pass and play means that the longevity of this game is limited. Had this game had the simple option of pass and play you could add a full point to the score however the wonderful look of the game and the award winning gameplay aren’t enough to help this board game app stand the test of time. 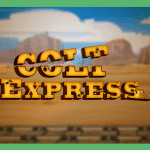