Can you help Robinson Crusoe survive on the island or will you fall prey to one of the many hazards, that’s your task in the game Friday. Does this app succeed with this port or should we leave it stranded in the app store?

For a long time Friday has been a favourite of the solo board gaming community and a game I have played an absolute tonne, so when I heard that it was coming to an app I was understandably excited (if a little surprised).

Friday is a solo deck builder where you play the part of Friday, aiding a hapless Robinson Crusoe to survive on the deserted island by slowly improving the starting deck with more powerful cards while cleansing it of the less powerful ones. This improvement is all in preparation for facing 2 randomly selected pirate cards with a myriad of challenges to defeat, should you survive long enough to face them.

A turn consists of choosing from 2 random hazard cards of varying strength and drawing a corresponding number of cards from your deck hoping to match or exceed the strength of the hazard. Should you win this bout the card will be added to your discard pile ready to be potentially drawn the next time you cycle through your deck. Losing the bout does afford you the opportunity to discard weaker cards, increasing the chance that you draw only your most powerful ones in the rest of your deck. Add to this various special actions associated with cards, a limited supply of life and negative cards added to your deck with each cycle through and you have the crux of the game Friday.

The presentation of the board game app Friday is a bit hit or miss in my opinion. It is a combination of cartoon artwork combined with pixel art backgrounds and is a bit of a mish mash. Although the design is the same as the physical game it’s never really been to my tastes. The cards in the deck can be a bit busy and while they are easy to understand once you have played the game a few times; newer players may struggle. It’s the little touches with the presentation that make all the difference, things such as double digit numbers not completely fitting within the circular container detract from the game and although aren’t deal breakers it’s just worth noting. Thankfully though, the gameplay is all present here which is where Friday always shone as a solo game. The decisions you have to make throughout a play through are frustrating and of consequence especially as cleaning your deck of the weaker cards comes at the cost of your limited supply of lives, but the importance of being able to draw stronger cards more regularly as the game progresses makes this pricey card cleansing essential.

As Friday is a solo game through and through there is no multiplayer option other than a leaderboard for you to compete against however the difficulty level of the game, even at its lowest level, is enough for you to only win 2 out of every 10 games and with another 4 levels of difficulty to try you won’t be short of a challenge. As with the solo card game app Onirim you don’t have to deal with any AI as the opponent for this game is the deck itself which means it is as balanced as the physical game and suffers no inconsistencies you see with games that rely on AI for their challenge

As a game itself Friday is a 5 out of 5 for me, it’s not often you find a solo deck builder with as many impactful decisions on every turn however the presentation lets the app down for me. Although it follows the art style of the original game it feels like a missed opportunity to include some updates to the presentation or even ironing out some of the minor frustrations. It’s also worth nothing that the rulebook within this app is a simple port from the physical game. While this still gives you the information you need in order to play the game, it also references card placements and set up rules which are irrelevant for the app. A fun game let down by the little touches. 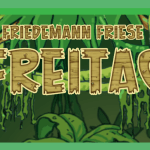