If you’re looking for a quick roll and write game you can play on the go should you check out Ganz Schön Clever? Did the developers struggle with the port or did they get it right?

Ganz Schön Clever is a roll and write game and while the ‘board’ might look complex, it’s exceptionally simple once you get your head around what’s going on. The aim of the game is to get the highest score possible by the end of 6 rounds. A round consists of rolling 6 dice of different colours and selecting one of the dice to be used to mark off a square on your game board. Once a dice is placed it is removed from the dice pool for the rest of the round. This is repeated 3 times before a random 3 dice are rolled for you to make an additional dice selection. The key with a game like Ganz Schön Clever is which dice you choose and where you action them, this is the point at which you will be facing some tough decisions.

Dice placement is limited by the colour you use and the number on the dice. Sometimes you will find that you are unable to place some, if not all of the dice on your board due to placement options no longer being available or having already been used. For example, the first green dice placed has to have a number greater than 1, the second green dice greater than 2. Should you roll a green dice lower than the number you require you simply are unable to place that dice. Each coloured dice has its own placement rules and scores differently, all of which you can see either via the game board or by playing through the tutorial included with the app. Bonuses are awarded at the start of each round and upon completing certain squares on the game board and can result in rerolls, repeat dice placement and even a free wild dice to place. Aiming for these bonuses is key to your success and your ability to chain bonuses together to fill out your board will result in higher scores. All in all Ganz Schön Clever is a Yahtzee style roll and write but with enough depth and originality to keep the mechanics fresh.

I will make no bones about it, it is hard to make a roll and write game look interesting. After all, you are simply rolling dice and marking off your game board. Despite this I think the presentation of Ganz Schön Clever does a good job despite no theme to work with and limited scope for artwork or animation. Where a game of this type can thrive is in clear iconography and ease of play. Ganz Schön Clever is pretty overwhelming when you first look at it; there are 6 play areas, all laid out differently, each with different rules, scoring and bonuses so it is therefore no wonder that beginner players might feel lost. Thankfully the developers have made things as easy as possible by highlighting exactly where you can place your dice on each turn for you to take out any working out for you, leaving you to try to best optimise your placements. This is a fantastic touch which helps alleviate some of the learning curve. Speaking of learning curve, you will find that after 1 or 2 plays through, once you have established how each dice plays and seen first hand how you can utilise your bonuses you will pretty much be up to speed with Ganz Schön Clever; all that is left is learning how to maximise your points.

Maximising points really is the name of the game for this digital version of Ganz Schön Clever and that is mainly because that is the only game mode available to you. While the physical version of Ganz Schön Clever comes with the ability to play multiplayer where you are trying to best your opponent, the digital version is a solo only experience where your only challenge is the leaderboard. While I’m a massive advocate of pass and play I understand its exclusion here and similar roll and write games such as Qwixx, the nature of the digital versions of these games is to be a quick couple of minutes playing, the ultimate filler app, and adding the additional time to pass the device around seems to go against the aim of the app. Thankfully though, the challenge of the game doesn’t have to come from AI in lieu of multiplayer options, as you are competing against the game itself which is challenging enough. The dice rolling obviously leads to a lot of luck however this is the challenge of Ganz Schön Clever, to attempt to complete areas while leaving the most amount of options available for you. Only once so far have I broken the 300 points mark and I regularly find myself with getting sub 200 points because I have gambled on chaining bonuses which just have not paid off.

Ganz Schön Clever is a quick, light game, it doesn’t intend on being anything more than that and it doesn’t expect you to sit down for hours on end playing through it over and over again (although you just might). There is a Challenge 2 mode which is unlockable through in app purchase which modifies some of the scoring areas for dice but is simply more of the same. Despite all of this I still keep Ganz Schön Clever on my phone for those times I am waiting for a coffee or am on a train. It’s testament to how pick up and play Ganz Schön Clever is that I still play it to this day. Anyone looking for a 2 minute Yahtzee game which is just that bit smarter could do a lot worse than Ganz Schön Clever. 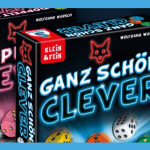