Is this medieval themed game of animal influence out dated or is it the top dog?

Harald is funny little game centred around medieval animals and their influence within the court. Each turn follows the same 2 actions, place a character card from your hand within the kings court to increase the characters influence on the king and secondly place a character card from your hand into your own village both completing the unique ability of the character as well as increasing the number of that character you have yourself. Points are scored at the end of the game by adding together the total number of each character you have in your village and multiplying these by the influence of the corresponding character in the king’s court which is a shared tally.

While it sounds simple the challenge comes from the range of special actions each character type possess as well as the bonus scoring available from each character type in your village. Special abilities take the form of swapping cards from your village with the court, your opponent and your hand and visa versa. You may be collecting a high number of Bards in your town which are worth a lot of influence one turn only to find with one special ability your opponent has swapped out the Bard from your village with one of their worthless Scouts and now they have the lead. It is this back and forth of actions that means that players have to be adaptable in the face of an ever changing landscape.

It may seems easy but Harald is not simply a case of getting the most number of the highest influence characters into your village when the game is finished thanks to the clever set of bonus points awarded for each character type. The way in which each bonus is dependent on a different character means that having a balanced village is as important than having the most influence. Gaining the Seafarers bonus only if the number of Scouts is equal to the Seafarers or the Warriors gaining +1 bonus point for each Bard in the village incentivises having equality within your village. It’s such a delicate eco system that removing one card from it can lead to a complete collapse of your points and it’s this hunt for your opponents house of cards that makes Harald an interesting board game app.

Presentation is where this app becomes less appealing. The character artwork has been softened compared to the physical game however no other elements have been which just leaves you with a weird juxtaposition of cartoon characters with a realistic looking medieval texture and feel. I found it jarring and a put off for me when I initially downloaded the game. Iconography within the game isn’t hugely clear but is thankfully explain via text on every card so there’s nothing too confusing. The interface is simple and just works but is very much no frills. The potential of medieval animals in your artwork can be brilliant (Root is a prime example of it done well) which is why it’s such a shame that Harald wasted this opportunity when they were overhauling the character design anyway.

Multiplayer is handled by an online system that requires an account to play and the app does not offer a pass and play mode which is always a disappointment. I have struggled to find many matches online due to limited other players which is a pity because it is a fun multiplayer experience. You do however have a few more options for single player with play up to 3 AI, an included expansion as well as a hard mode which increases the AI difficulty to a very challenging level. The AI on even the normal level can be punishing and well thought out strategy is rewarded while poorly timed moves are punished. I win at about a 50% ratio and I’m pretty happy with that.

Harald is a light card game which challenges players to be adaptable on every turn. I love a game that makes me have to reassess my strategy and amend it based on what my opponents are doing. Pulling out a character from an opponent that is holding together their house of cards is satisfying due to the understanding of the cards you need to be able to identify their weakness. Don’t be put off by the less than stellar art work and graphics because behind the weird mish mash is a solid card game that I think works best as a two player but does scale well with up to 3 AI.

If you enjoyed Silver then I think you will love Harald which is the next step up in card games of this type. 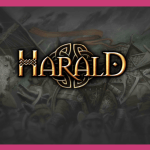