Will you have to settle for an average app or does this port get it all right?

Roll and write games are an interesting beast; they often lack a lot of the depth of decision making that other game types have but make up for it with addictive score chasing and a quick play. In the same way people might find themselves devoting hours to apps like Candy Crush, I can be sinking that time into roll and writes. Games like Ganz Schon Clever and Qwixx have seen plenty of play time for me over the years and so I was excited to see Imperial Settlers Roll and Write hitting my device.

Imperial Settlers Roll and Write sees you rolling dice for both resources and workers before allocating them onto one of 3 areas of your player board. Researching blueprints for buildings provides you with instant resources, the ability to manipulate dice or ways to gain victory points. The effects of these buildings can be upgraded by placing the newly discovered Tetris like blueprints onto unlocked construction boxes in the second area of your board. These boxes are unlocked by spending the relevant number of resources and also garner victory points for you. As well as being a place to house the buildings within your settlement these construction boxes unlock the third area of your board, fields for harvesting single use resources which can be utilised to pay for the every expensive resource costs as the game progresses. All in all it’s a pretty neat set up for a roll and write which are usually an exercise in turn optimisation with a definite ‘right answer’.

In addition to all of the above, players have a choice of 1 of 3 randomly chosen favors each game, selected at random from a pool of 6. These are powers which can be used to gain extra resources or workers without costing you a worker action to activate. Which favors you start each game with will have a huge impact in the strategy you take going forward and which buildings you choose to build and which resources are more valuable. They’re so vital to high scoring in fact, that you entire game can be torpedoed from the off if you get an unfavourable selection of favors, and here in lies one of the issues I have with Imperial Settlers Roll and Write.

Don’t get me wrong, I enjoy the gameplay for this game a lot, and the introduction of favor tokens to push certain strategies within the game is a great one. However my problem lies with the balance of some of these tokens against one another; some render others completely useless and thus getting 2 tokens like this in your selection of 3 immediately limits your options. For example, one of the favor tokens is the Boon token which allows you to select one of the resources on the dice thrown and gain an additional one of these resources. There is however another token, the Lucky Coin token which gives the player a wild resource that they can use in place of any other resource. There’s no situation in which you would every choose Boon over Lucky Coin if you had both available to you thus making one of your favor slots completely worthless. When favors are as similar as this is leaves you in the hands of the gods as to whether you’re dealt a hand of useful ones to maximise your score or a dud group that leaves you short on options.

I understand the element of luck intrinsic in roll and write games, and we get plenty of that in not only which of the 3 resources we roll but also in how many workers we have to use that turn (which can be devastating to your score if you roll a 3 rather than a 4 or a 5), so the addition of luck within our favor tokens pushes it too far for my tastes. If they want to continue down this route my preference would have been for some more differentiation between some of the favor tokens.

Gameplay aside, Imperial Settlers Roll and Write’s presentation is playful and fun, it borrows from the art style of the parent game by Portal Games, Imperial Settlers, and amplifies the feel of a physical roll and write with it’s choice of hand drawn boxes and icons throughout the user interface and menus. Playing the game is intuitive and as simple a click and confirm throughout, which is useful as the tutorial for this game does little to help in either controls or how to play the game. If you’re new to Imperial Settlers Roll and Write I recommend reading the text rules as well as simply forsaking the tutorial all together.

Unlike the physical version of the game which is geared towards a multiplayer game, the app implementation is for single players only, utilising the solo variant included in the physical game. Although there are plans for multiplayer modes in the future the initial release contains 48 unlockable solo scenarios. Each scenario provides users with a unique player board with varying buildings each with their own abilities as well as differing thematic art for each board. There’s a tonne of content for you to grind through in this game, even as a single player, and grind you will have to do.

Each new player board scenario requires an ever increasing amount of crowns to unlock, gained by achieving certain scores on previous scenarios. While this is standard practice for a lot of games the price to move through Imperial Settlers Roll and Write gets expensive quickly, especially due to how difficult crowns are to come by. My worry is whether the novelty of a smartly designed and well put together game wears off before I have progressed enough through the game playing the same scenarios before I’ve truly seen everything this app has to offer, only time will tell on this one.

Overall Imperial Settlers Roll and Write is a great game within it’s genre. Yes it suffers with dreaded luck synonymous with games of it’s type, not to mention my dreaded fear that it will simply take too long to unlock all that it has to offer. However the fact that a game dropped on my device with so many things to unlock along with a spin on the roll and write game play mechanics which breathe new life into the genre is refreshing and should be commended.

Figuring out the best way to use my buildings with my 3 random favors to create a strategy before even a single dice has been rolled is a triumph of game design and should be commended and so it’s easy to over look my other gripes. If you’re a fan of the genre, looking for an addictive score chasing game that’s equal parts rewarding as it is frustrating or simply like good looking board game apps for single players then Imperial Settlers Roll and Write might just be a good choice for you, I know it was a good antidote to what ails me. 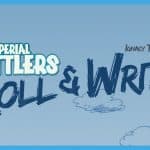