Does this adaptation of the tile laying game set itself up to be the king of games or should it be sent out to sea?

Isle of Skye is a tile laying game with an auction mechanic which pits you against your opposing players to see who will finish the game with the most victory points and take the step from chieftain to king. This is a game I recommend to new board gamers as a step up from Carcassonne; it builds on the mechanic of tile laying which they will have learnt and adds into it a simple auction phase in which players will assign money from their own stash to up to 2 out of 3 random tiles they draw. One of the 3 tiles is discarded and the remaining two tiles become available for purchase by other players at the cost you have set. Should another player buy one of your tiles they are able to place it that turn and you receive both the cost of the tile from them but also any money you have laid on the tile; you miss out on laying a tile but you gain the resources to buy a tile from an opponent.

It is this to and fro of wealth which makes it a slightly more interesting game than a simple tile laying game. Pricing tiles you want to keep to they are too expensive for the other players but not so expensive that you are left with no funds to buy other people’s tiles is an art form in itself. On the other hand avoiding under pricing tiles you want to keep or which will help your opponent gobble up victory points is vital.

At the end of the auction phase of the game comes the tile laying phase where you can lay any tiles you have bought or have remaining in your hand unpurchased by your opponents. You lay them in such a way as to score victory points from the 4 randomly selected victory point criteria. Depending on which round of the game you are on different combinations of the 4 criteria are scored so it’s important to lay your tiles in a way that is going to score either that turn or in the future and not focus on a criteria which has already been scored.

There are 16 victory point criteria ranging from points awarded for the most ships within your tableau to the points being awarded for how big your biggest lake is. 4 of these are randomly chosen at the start of the game and so no two games feels alike thanks to the variety of win conditions on offer.

Presentation wise Isle of Skye has the standard Digidiced menu systems and look which we are accustomed to, this means that everything is clear and easy to manage on even a smaller touch screen. Graphically there is nothing ground breaking here but similarly it is very passable in both art style and animation. I’ve had experience of a few issues of games freezing after the auction phase (mostly in pass and play multiplayer mode) which can be a frustrating issue to encounter, especially as games are saved for you to jump back into. Issues like this detract from the over all app and while they are relatively rare they occur often enough for it to be frustrating to try and play multiplayer knowing that this might happen 15 minutes into a game.

Speaking of multiplayer Isle of Skye have the plethora of multiplayer both offline and online as well as a varied AI that you come to expect from Digidiced board game adaptations. You have online ranked and casual matches as well as local pass and play. Single player is against up to 3 additional AI with 3 levels of difficulty. Having played this app a number of times I soon found that I was able to compete and win more often than not against even the hardest AI setting. I enjoy a challenging AI especially on the hardest setting and so it was a bit of a shame that I was able to win so regularly. In addition to the ease of winning I also found the AI to be a little slow with it’s decision making especially in the buying phase of the auction. It’s not prohibitively slow but certainly noticeable compared so some other board game apps.

I really rate Isle of Skye as a game and think it is a wonderful next step for new gamers looking to progress passed Carcassonne into a more complicated game without it being a step to far. This digital adaptation of the game is a solid attempt with only a couple of issues that knock the score down slightly. A slow and only mildly challenging AI coupled with the occasional crashing of the game in multiplayer mean that the app version is held back compared to the physical game. The lack of available expansions which really add to the base game is also a shame but hopefully something that can be rectified in the future. All in all Isle of Skye is a good implementation and a worthy inclusion in your board game catalogue especially for new players looking for a mid weight game. Hardcore gamers may find it too light and with a lack of challenge but it doesn’t stop Isle of Skye being a great warm up game preparing you for something a bit heavier. 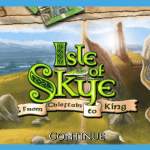