Will Istanbul be a storming success or will it find the quickest route to being uninstalled?

Istanbul is a worker placement game that puts it’s emphasis on placement optimisation more than most other games in this genre. You play as a caravan of workers being deposited across the board collecting and trading various goods until you are able to collect 5 rubies; at which point you win the game. It’s pretty standard worker placement fare as Istanbul has you collecting one type of resource to exchange it for another type of resource, improving your ability to hold or collect resources and collecting bonuses to aid or hinder you and your opponents as the game progresses. However where Istanbul differs compared to your usual worker placement games is the mechanism surrounding your caravan.

Each players caravan consists of a stack of workers which can be deposited on a tile in the 4×4 game board grid and the action taken. You caravan has limited movement and once you have deposited a worker it will remain on that square until you pick it up and add it back into your caravan, again taking the action of the square you collect the worker from. What this means for gameplay is that you are looking to optimise your route around the board so that you can collect your workers as you move around without having to waste a turn calling them all back at once and missing out on taking an action. The player who can best optimise their movement around the board will come away with the most spoils.

It’s a mechanism that can take a while to get your head around and one that provides plenty of challenge. Thankfully the grid can be randomised for each game so that you are provided with a fresh puzzle to figure out each time you play. Thankfully for beginners there is a simple set up which makes for easier routes around the board to give you a chance to learn the game.

When it comes to learning the game there is a short tutorial within the game which only really provides you with the very basics needed to start a game. Thankfully the app provides written rules which give you everything you need to know which I recommend reading for first time players. Learning the game can be achieved easily enough against the AI which is reasonably challenging but not too punishing on the lower settings.

Istanbul is a good looking app with colourful artwork that pops on screen as well as smooth and short animations to add flavour. The tiles on the board can look a little busy with iconography occasionally lost against the pictured background but not bad enough to cause any real issues with the game. Online multiplayer is also available should you wish to compete against your friends and games last around 15 minutes so you can fit in a couple of rounds within an evening quite comfortably.

While the app includes the base game it lacks 2 of the key expansions which many (including myself) deem essential for this game. Similar to how I struggle to play Catan without the addition of Cities and Knights expansion due to the game feeling light and uninspiring without it I feel the same way about Istanbul without Mocha & Baksheesh and Letters & Seals. Both add an additional layer of complexity without overwhelming the game. For any players other than beginners they make for essential additions to the game which is why it’s a bit of a shame that they aren’t available with Istanbul right now.

Regardless of this, Istanbul is a good adaptation of the physical game, it looks great and games can rush along at a pace. It’s fun and challenging especially for new players, and the ability to randomise the board each time adds to the longevity of the game even for more experienced players. A good adaptation worthy of a download for sure. 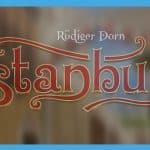