Is this a killer adaptation of the popular board game or a mere ghost of it’s former self?

If you’ve not played the physical version of Mysterium in the last 5 years then where have you been hiding; it’s been a huge hit and one that finds its way on the tables a board game cafes and game nights across the globe regularly. Despite all this it was a bit of a surprise to me when an app version of Mysterium found it’s way onto our devices and I’m going to talk a little bit about why that is.

Before I get into the details I’m going to go through the gameplay of Mysterium for that few people who haven’t played it before or do not know how it plays. Mysterium is similar to Cluedo in as much as you are attempting to solve a murder by identifying a killer, a weapon and a location all before the night ends. Where it differs from Cluedo is in how you go about cracking the case; rather than relying on good old fashioned logic and detective work, wandering around the house interviewing suspects, in Mysterium you garner your information through feeling and psychic detective work aided by a ghost.

Each turn a ghost played by either a player or the AI will reveal cards to the other players indicating which suspect, location or weapon they want for the detectives to choose for each case. The cards aren’t your run of the mill cards however and are in fact abstract dream looking cards which have little to no relation to any of the people, places or weapons. It’s the job of the detectives to interpret these physic visions and choose which piece of the puzzle it refers to. One turn you may decide on a location because, although the card is of a picture of a knight in shining armour drowning in an hourglass, the colour and feeling it gave you made you select the pantry; and another turn you might select the rope as a murder weapon because the picture of the paper aeroplane seemed to have a snake in the corner which could be interpreted as a rope.

Based on how quickly detectives manage to solve their individual cases they are given a number of cards to attempt to select which of the cases they have solved is the murderer of the ghost. Solving quickly can net you up to 3 cards to aid in this compared to slowly solving your own case in which you will be expected to solve the case with only 1 card. All of this makes for a co-operative board game with an element of competition which is a nice and unusual thing to see in board gaming.

The joy of Mysterium lies in the uncertainty of the cards the ghost provides as clues. What might seem obvious to one player is alien to another and this discussion between detectives trying to decipher the ghost is one of the elements that made Mysterium such a hit on the table. Finishing the game and getting a run down of exactly what the ghost was seeing in each card was interesting and enlightening and something that I was worried about the app being able to replicate.

Before I delve deeper into that I want to touch on the overall presentation for the game. As a board game app Mysterium looks great, animations are clean and well themed, all the artwork you expect from the cards is in there and is as glorious as it is on cardboard and the characters, locations and weapons look great even on smaller devices. There’s tonnes of nice touches in the apps user interface which made playing easy such as the ability to zoom in on any aspect of the cards to pick out some potentially important details in the clues. Overall it’s a clean and easy app to use and navigate and the art work is great, bright and a delight and while some of the writing used in the story mode can be a little unnecessarily wordy it’s a good presentation of a good looking board game.

It’s comes with a bunch of play options for both multiplayer and single player included within the app however in reality it’s on the multiplayer options within Mysterium that you should consider playing and here in lies the massive problem with Mysterium as a board game app.

Single player modes consist of story mode as well as custom games and are played against the AI as either the ghost or a detective. For a game which bases it’s mechanics on vague feelings and cloudy understanding it feels weird to think about giving a vague clue to an AI and hoping it is going to understand what you mean, And it feels the same when receiving a clue from an AI ghost, how are you supposed to get into the mindset of a computer to understand what they are trying to tell you, how are they deciding which unclear card to choose over another. It’s an unusual thing to have to get your head around and all in all feels quite pointless because after all the joy in Mysterium is not in just guessing who did it, but in finding yourself on the same wavelength as your friend when you both interpret a dream card to mean exactly the same thing.

Once you played a few rounds of the story mode (which also acts as the games tutorial) you’ll soon relegate single player games to completely unplayed. Thankfully though there is still some fun to be found within the multiplayer options for Mysterium. Both online and pass and play options are available and work really well, online matches are easy to come by and offer random matches as well as the ability to play with friends and pass and play does a great job of hiding information for players to keep the mystery alive despite being on a single device.

Both online and offline multiplayer carry a lot of the same elements of discovery and joy at sussing out the ghost and online chat allows for some nice run downs of what the ghost was trying to say with the cards. While it’s not the same as sitting around a table laughing about how on earth the ghost could possible get “a gun” from that card it does a reasonable job of replicating what it can in app form.

The Mysterium board game app is an odd one to review. I like the gameplay and think the way it’s handled in the app is good, the presentation is well done and multiplayer is fun to play. However the single player is such a dud and it’s down to the completely flawed premise of having to guess what a computer is thinking about a vague subject. AI works best when it is able to analyse the situation and move forward with clear defined decisions, putting one in a game like Mysterium and expecting it to hold the weight of the game is a mistake and one that makes half of the game modes redundant. This board game app falls slap bang in the camp of only to be played multiplayer and because of that it doesn’t get played half as much as it probably warrants. Rating as a multiplayer only would probably earn Mysterium a higher score, however the opposite could be said for rating as single player only and as such I arrived at this average score. If you’re looking to play Mysterium online with friends or on one device then don’t be put off the low score, if you want to play Mysterium but don’t have any friends to play with then you’re better off trying to find friends than depend on this app alone. 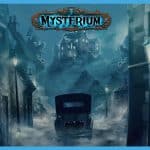