Is this new version of Neuroshima Hex bewitching or is it cursed?

Neuroshima Hex is a tile laying game set under the back drop of a post apocalyptic warzone. You set about defending your HQ from an onslaught of military units, buildings and actions all represented by the tiles you lay each turn onto the small 19 spaced hexagon shaped board. The player whose HQ is still standing by the time all of the tiles have been either played or discarded wins the game, should both HQs survive then the player with the highest remaining HP out of the starting 20 point is deemed the winner.

Each turn sees you drawing 3 hexagon shaped tiles, discarding 1 and placing 2 onto the game board. Military units provide either a melee attack or a ranged attack on anywhere from 1 to 6 of their flat sides and thus placing them so that these attacks are facing your opponent is the bulk of how you will either damage their HQ or remove pesky opponent’s units from the board. In addition to these attacks listed on the hex tiles each also contains at least 1 initiative number from 0 to 3 which indicates the order in which each tile will be resolved when it comes to battle actions played throughout the game or at the final battle once all tiles have been placed. The crux of the game lies within these 2 numbers, attack and initiative; ensuring that your units fire before your opponents in order to clear enemy attacks before they can occur while keeping up your onslaught on their HQ is what is going to lead you to victory. Your ability to manipulate these numbers at the right time via the use of your buildings and action tiles can prove the difference between winning and losing.

The building tiles provide you a way of increasing either your attack numbers, dealing more powerful attacks on your opponents and assisting in dispatching harder to shift enemy units or lowering their HQ’s HP faster, or increasing your initiative score allowing you to strike first and potentially destroy enemy attacks before they are able to fire. Buildings provide these stats bumps to adjacent units so careful placement in order to maximise these increases is a vital part of your planning. In addition to these tiles you have a selection of action tiles that allow you to shift adjacent enemy tiles, move and rotate your previously placed tiles as well as initiate a round of combat, resolving the units in initiative order.

As you can see from that brief rules introduction Neuroshima Hex is quick to learn and simple to understand, your limited number of choices you make each turn as well as the limited spaces to lay your tiles means you aren’t buried under a weight of decision making. However thankfully there is plenty here to have you strategising and planning moves turns in advance hoping to set of a chain reaction of events.

One of the biggest changes from this new version of Neuroshima Hex is the updated presentation that Portal Games have implemented. Tiles are simplified and clearer in their design making it far easier at a glance to determine both attack strength as well as initiative. As well as this the new version of the app looks both cleaner and more modern in its approach to the game while remaining tactile with its intuitive drag and drop controls which I like to see in board game adaptations. Colours are bright and the character designs, while cartoonish, provide a good theme for the world as well as creating plenty of variety between each of the 4 available factions. Overall this update is a successful one when it comes to presentation, and any app version of a board game which moves to clearer iconography for quicker gameplay is taking strides in the right direction which is exactly what the Neuroshima Hex app has done here.

When it comes to options Neuroshima Hex currently has both local and online play against both humans and AI with 3 difficulty levels. The AI so far has proven to be pretty strong especially for me coming in as a less experienced player and although I now regularly beat the medium AI most games I still find the hard AI to be a solid challenge for me. Currently the app is only playable for 2 players however the app has slots for up to 4 players in the menu so there is hope that more will be added in the future. One thing that has been confirmed for future updates is the introduction of additional factions to the game which is where the bulk of the games variety and longevity will lie. Each faction providing both unique strengths as well as unique unit tiles changes the way you approach each game and so increasing the options from the initial offering of 4 factions will increase variety as well as make the game more and more replayable.

Overall Neuroshima Hex is a fun and addictive board game app, it’s quick play time of around 10 minutes means that you’ll want to have multiple games per session and the level of complexity means you won’t tire yourself out mentally in doing that. I thoroughly enjoyed foiling my opponents plans time and time again with a chain of well placed and high initiative units, clearing out potential dangers before unleashing attacks on my opponent’s HQ. Each faction is subtly different enough to change how you go about placing your tiles but balanced enough that I never feel like I’ve lost the game before it’s even started based on the pairing I get in a game which leaves me excited by future updates adding additional factions for me to include. However, due to the fact you can play so many games so quickly these updates with additional factions plus the potential to add more than 2 players to the game could be essential for me for the replayability of the game and provide the much needed variety to stop the game becoming too stale with regular play. As it stands, Neuroshima Hex is a great lightweight tile laying game which stands up really well against other 2 player only board game apps; it’s fun, simple to learn and strategic enough to keep me thinking and so I think it makes an excellent addition to your collection. It’s one that can only get better with the addition of new content and so I’m excited to see what Portal Games throw our way next. 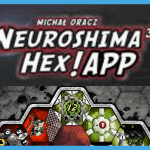