Is this digital port of this modern classic a cure for your boredom or will you be sick of playing it?

Pandemic is a classic gateway game, introducing new players into the world of co-operative game play. You take control of a team of people attempting to find the cure for 4 diseases quickly spreading across the globe. If you can cure all 4 diseases before they outbreak too much then you win the game. If they outbreak and spread across the globe then you will lose and the game wins. Pandemic has been so successful as a physical game that it has spawned countless expansions, adaptations and variations and so it makes sense that the original base game would find it’s way onto our devices, but does this adaptation do a good job of capturing the spirit of the original?

The app version of Pandemic is faithful to the gameplay of the original game. At the beginning the number of players are selected as well as the specific roles that each player will take. These roles come with unique abilities such as being able to move other players pieces on your turn or being able to treat diseases at a much faster rate. The combination of roles chosen impacts the strategy you use to tackle the game and provides an interesting level of strategy for you before the game has even begun.

Once the roles have been selected the game will automatically begin the set up. This includes drawing a hand of location cards for each player as well as locations which will be infected with diseases. At the end of each turn players will draw further infection cards from the deck and add a disease token to the locations on the cards. Each location can contain up to 3 disease tokens, any more disease tokens added to an area will cause an outbreak; moving the outbreak tracker up, increasing the rate in which you infect locations on future turns and adding a disease cube to neighbouring locations (a chain reaction of which may cause an additional outbreak should this take the neighbouring location to go over the 3 token limit), ultimately bringing you closer to a loss.

The constant infection at the end of each players turn is a neat mechanism that organically ups the pressure and keeps players from executing their plans with a view solely on the long term. If you leave a disease untreated in locations while you hunt for a cure you will quickly find a chain reaction of outbreaks causing you to lose the game.

Randomly throughout the game players will also draw Epidemic cards which cause a new location to have 3 disease tokens immediately placed onto it and then all the previously infected areas are shuffled together and placed atop the deck. This means that you know for certain that at risk locations will be coming up before too long. This is a fantastic way in which the game increases the difficulty as you progress; drawing two Epidemic cards in quick succession can leave you having to deal with some locations being infected in a short space of time, increasing your chance of an outbreak. You really feel the peril that comes with each Epidemic and it’s amazing how quickly a game can get out of hand without you realising it.

Diseases are cured by collecting sets of location cards and trading them in to cure diseases. You are aided by special ability cards which are drawn randomly which can help you to cure diseases as well as treat locations to keep diseases at bay. Whether you spend your turn trying to treat locations and remove disease tokens or hunting down cards to ultimately cure the disease is the key decision making you have to make on each turn; choose wisely or you can see diseases spreading unchecked or you can find the game going on too long without you progressing to the cure. It’s a fine balancing act and what made this game such a hit as a physical game as well as a popular app.

The rules may seem a little complicated however they make a lot of sense when you start playing and thankfully the app does a good job of all of the book keeping for you leaving you to concentrate on how to utilise your moves on each turn. The animations are nice and also quick which means you really can rattle through the game at a good pace. Iconography is clear throughout and is a nice replication of the original art work from the board game. Controls within the app are very intuitive and also offer you a number of ways to do the same thing; if dragging and dropping your pawn feels natural to you then you can do it, if you’re more of a click and confirm kind of player that’s fine too. This kind of flexibility means the game is super easy to pick up and know what you can do and is not something you often see in a board game app implementation.

Multiplayer is handled via pass and play only as there is no online mode. While this is a little bit of a shame it is understandable as dealing with the planning and co-operation required between players can be tough to achieve in an online environment. Pandemic really shines as a solo experience where you take control of all of the players yourself, making plans and executing them yourself. Anyone who’s played co-operative games with me will know I am not a huge fan of playing them with other people. Having to curtail my instincts to control the moves to allow other players to have an input is not natural for me as a board game player. With this in mind being able to play Pandemic quickly in single player mode appeals to me and is a good reason why this app can be a success.

Because you are competing against a game rather than an AI making decisions the app doesn’t have to worry about providing a challenging AI. What this does mean is that the challenge comes from the difficultly level of the game itself which can be tweaked by increasing the number of Epidemic cards which are included in the deck as well as how many infection cards are drawn at the end of each players turn. Due to the beautifully balanced original game the app is wonderfully challenging on even the easiest settings and becomes down right near impossible on the hardest setting. If you’re after a satisfying challenge then Pandemic the app is a great place to start

Despite my dislike for co-operative board games, Pandemic is a good implementation of a classic board game. It looks good and runs at a nice pace and provides a challenging co-operative game which works just as well solo as it does multiplayer. The lack of online play is a shame but the variety of character roles and game play tweaking you can do mean that there is plenty to keep you engaged and motivated to keep trying to find a cure. While it’s not a app I fire up in constant rotation it’s one I would recommend for anyone who is looking for a non competitive board game app who still wants to feel like each action they take on their turn is important and that they are having an impact rather than just going through the motions. A solid board game app and one for everyone’s collection even if it doesn’t personally blow me away. 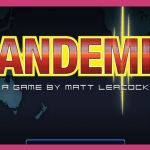