Will this classic roll and write game be the right game for a quick roll?

Qwixx is a roll and write game similar to classic games like Yahtzee in which you are rolling dice and choosing how to utilise them with the aim of getting the highest score possible. This app version of Qwixx is a solo affair where you only opponent are your previous high scores which makes for a highly addictive board game app that you will find yourself playing over and over again.

The aim of Qwixx is to fill up as many of the numbers on your board before you lock out a row. The board contains the colours red and yellow which go from 2-12 and blue and green which go from 12-2. You lock up a row by taking dice that equal either 12 for red and yellow or 2 for green and blue; and once you have either locked up 2 rows, or have made 4 mistakes, the game ends and your points are added up.

In a game of Qwixx you will roll a total of 6 dice, 2 white and then one of each of the 4 colours, red, yellow, green and blue. You then have the option of choosing the value on both of the white dice combined and noting down the number on any of the 4 charts numbered 2-12 or 12-2. Once you have noted down a number on the chart you are unable to place a number in the future which is lower than that number (for red and yellow) or higher than the number (for green and blue) thus locking you out of any spots you have skipped in order to place your dice choice. Should you opt not to take the white dice number you can then take one combination of any of the white dice combined with any one of the coloured dice and note that down instead. If you choose not to note any numbers down (if you don’t want to lock yourself out of a lot of numbers) or you are unable to choose a dice you receive a mistake, 5 points are minused from your score and it puts you one step closer to ending the game.

To put it simply, the more dice you are able to take on your track the higher the score you will get and so optimising your dice taking is key in Qwixx. While it might sound a little complicated it really is a very light dice game that is fun enough to warrant playing from time to time.

In terms of it’s presentation, Qwixx is not going to blow anyone away but it is functional. A pretty crude dice rolling animation happens every time you need to reroll the dice which felt like an unnecessary inclusion and the board looks like a pretty basic mock up of a desk. It’s not going to wow you however it does the job and is nicely slimmed down on the screen.

Having written my initial review based around the Android version of Qwixx which I have been playing for a number of years Outline Development reached out to pass along information about the updated user interface available for iOS users which includes a far more modern and attractive design and one which is much more in keeping with modern adaptations of board game apps and so while my initial score of 4.6 is still applicable for the Android version of the game as it still utilises the old design, I have updated the overall score based on the new UI used on Apple devices.

Both the rules and decision making in Qwixx are simple, there’s less to think about than other roll and write games and as such if you’re looking for a dice rolling score chasing app then I’d recommend Ganz Schon Clever which has more going on and is a far more exciting a roll and write than Qwixx does. With that being said, for fans of the physical game the Qwixx app makes a fine addition to your collection and as a firm favourite of our household it’s an app that still gets a run out now and again. 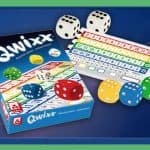