Will this adaptation of the popular card game win a gold medal or will it be out of the race entirely?

Race for the Galaxy is an exceedingly popular and well regarded card management and tableau building game since it’s release in 2007. Gameplay is broken down into 5 actions which are simultaneously chosen by each player at the beginning of each round. Players will then get to take all of the actions selected by all players gaining a bonus from the one action they chose themselves. It’s an elegant system reminiscent of games such as Puerto Rico which use it well. You use these actions in order to build your tableau up to 12 cards or alternatively exhaust the victory point supply at which point scores are tallied and the winner is decided.

The 5 actions you have to choose from allow you to draw more cards, play cards from your hand and utilise the cards already in your tableau to gain resources or spend resources and so the game is all about your hand and tableau management. There are 2 great features of Race for the Galaxy as a game, the cards themselves and how you pay for the cards.

The strength of Race for the Galaxy and it’s cards comes in the variety of card actions they provide; they give you great and varied avenues to victory and provide you with multiple ways to gain victory points. Be it creating a galaxy of ever more powerful military planets before finally playing a planet that gives you victory points for every military plant you have in your galaxy to creating an engine that sees you creating one type of resource on mass before turning it into victory points the following turn; Race for the Galaxy has a wealth of routes you can take to that illusive victory.

Race for the Galaxy rewards a defined and concentrated strategy, go into the game hedging your bets and walk away defeated. That being said don’t worry, the game is not so inflexible that you are unable to adjust your plans on the fly and become victorious. With such powerful and varied cards at your disposal you’d be forgiven for thinking that the game is simply a case of playing your highest points scoring cards every turn with no thought, however this is where Race for the Galaxy’s second masterstroke comes in. The currency used to play cards is the cards themselves. Play a card with power of 4 and discard 4 cards from your hand; it is a calculation of opportunity cost and will determine just how much you want to save that high powered card when you know you will have to jettison your entire hand to pay for it.

These are the reasons why Race for the Galaxy is such a popular game and why it was an obvious choice for a digital adaptation however this comes with it’s own set of challenges.

The app version of Race for the Galaxy uses the same artwork and artstyle as the original card game which is either a pro or a con based on your thoughts about the game; for me it’s never been the best looking game out there however I can’t really fault the developers for sticking close to the source material. The real challenge with the presentation of Race for the Galaxy comes from enabling some quite complex text and iconography to be easily visible on even the smaller devices. Race for the Galaxy uses a defined and slightly complicated iconography to explain the actions available for each card, while these become second nature to experienced players they will be a stumbling block for newer gamers to the series. Thankfully in order to display these on the smaller device screen the developers have included text explanations available for each card in game to make it far simpler for newer players as well as the ability to zoom in. After a few weeks of play you will soon find that you will be able to understand all but the most difficult cards at a glance.

In terms of game options the Race for the Galaxy app offers online multiplayer both live and asynchronously via random matches as well as via friend codes and I have never had an issue either finding a match online or playing against friends. Unfortunately the app doesn’t offer a local pass and play option which for those of you who read my reviews will know it’s a big negative for me. Single player is offered against a varied AI which is challenging towards it’s harder levels and provides plenty of enjoyment should you prefer to play offline. The lack of achievements, a leaderboard or a campaign mean that single player games offline offer little more than one shot games with little to work towards.

Should you enjoy the base game the Race for the Galaxy app offers 3 expansions available via in app purchase, each offers additional cards and options as well as some including brand new gameplay mechanics which keeps the games fresh and exciting when you feel like you have mastered the base game.

All in all the Race for the Galaxy app is a slick and polished adaptation of the popular card game. Once you are accustomed to the controls and iconography then games can rush along at a clip, oft finishing in about 10 minutes; this is a huge bonus compared the the physical game which can take anywhere from 30-60 minutes. Yes the art work is not to my tastes and yes there is no pass and play option available with the app, however no it doesn’t kill the app for me like it might for other games, and this truly is a testament to the success of the gameplay. The flexibility of strategy and variety of cards leave me with a puzzle each time I fire up the app and this is what keeps me coming back for more. It’s not strange to see how this app often features in the lists for the best board game apps. A fun app to play if not to look at.

Race for the Galaxy 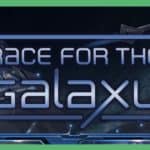