Are you able to come out as top God or will you find this port of this two player game hellish.

Santorini is a chess like strategy game with a fun and quirky theme. As with all the best games it is simple to understand but difficult to master which leaves you wanted to play one more game so you can make up for the mistakes you made in the last. The aim of the game is to move one of your two pawns onto the third tier of a building, the first player to do so wins. A turn follows two phases, the move phase and the build phase. Players first move one of their two pawns into an adjacent space including moving either up or down only one tier of a building. Secondly that pawn must then build a tier of a building. The challenge is to be able to build high enough to get your pawn onto level 3 without giving your opponent the chance to get there first or to foil your plans by increasing your buildings up to level 4.

Santorini at its core is a simple back and forth of move and build. The base game itself has a very chess like feel to it albeit very much simplified for quick gameplay. What makes Santorini such an interesting game is the inclusion of a wide variety of Gods you can choose from which modify the game play and provide each player with a unique modifier to their or their opponents move and build mechanics. The app comes with 34 Gods for you to choose from with a variety of special powers to impact game play for example an extra move or a modifier which means you opponent cannot move their pawns down a level once they have moved up. Knowing your opponents special power and how it impacts you is just as important as knowing your own; and the combinations of Gods you can play gives you plenty of variety to enjoy. While the game starts with 34 Gods more are available via in app purchase to add even more replay-ability to an already re-playable game.

One of the best things about the physical version of Santorini was the wonderful building pieces you use in order to build up the levels of the buildings. They were chunky but detailed and made the gameplay enjoyable. Obviously the digital version of Santorini is unable to have this tactile pieces however what it does so well is to use the cute and colourful characters and art style to create a beautiful port of the game. So what you lose in physical pieces you gain in character design and cute artwork. It’s a trade off where I don’t feel like you ever miss out. Controls are intuitive and all of your movement and building options are clearly marked for you so you never have to sit there wondering if your move is possible.

The game comes with comprehensive tutorial videos and descriptions for not only the game itself but also for each of the unique powers of the Gods so that even if you don’t fully understand the impact of their powers based on the written descriptions you can watch a video which puts it into practice for you. This kind of inclusion is rare and extremely welcome so I applaud Roxley Games for this.

There is multiplayer available online for both friends and random matches. None of these options are asynchronous and so you will need to be able to commit to a full game when you start however this isn’t too taxing as games take between 5 and 10 minutes to complete. Single player is handled through single matches where you can select Gods for both yourself or your opponent as well as a campaign mode called Odyssey. Odyssey sees you working your way through a number of matches against preselected Gods and new win conditions. You unlock more Gods and achievements as you progress. It’s a nice addition to a game which gives you a solid direction to go and increases your replay ability. Standard matches are played against a very challenging AI with 5 levels of difficulty. I found the AI to be a challenge even on the first difficulty setting and after I honed my tactics I have very much settled into the middle of the levels which gives me plenty of room for improvement in increasing my difficulty going forward.

Santorini is a fun and engaging chess style game with a tonne of content to keep you coming back time and time again. The fact the rules are simple to understand but the strategy is deep enough that it will take many hours to start to master it is the true success of this game. Add to that a beautiful presentation with a cute art style and intuitive controls and you have a fantastic board game port to add to your device. 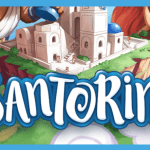