Will this faction based game have a fraction of the success of the original game or will it manage to turn this Small World digital port a big success?

Small World 2 is an wonderfully inventive twist on an area control game. The game takes place over up to 10 turns (depending on the number of players) and sees you selecting a combination of a race and a special power from a limited selection and taking over areas on a map. Points are scored at the end of your turn based on how many areas you control. At the end of the game the total number of points is tallied up and the winner is the player with the most victory points.

What makes Small World 2 unique is the races and special powers you select and how they interact with each other as well as your ability to put an active race into decline and selecting a new one. The base game comes with a large number of races all coming from your standard fantasy world; wizards, trolls, giants, halflings, humans and ghouls to name just a few. Each race has their own unique abilities, for example wizards will score an additional 1 point for each magic region they control at the end of their turn and orcs will gain an additional point for each occupied region they conquer that turn.

At the start of each game 6 of these races are combined with one of the special powers and are available for you to select. Special powers are additional abilities and modifiers applied to the race, be it the ability to conquer regions which are not adjacent to your regions or the ability to conquer a certain region type with less race tokens than you would normally need. Each race and special power comes with a total number of race tokens and so your decision on which race to choose will have to factor in the combination of race ability, special power and volume of race tokens you can use to spread across the map. The decision of which race to select will determine how you attack the game and the fact that each game will see a random pairing of race and special powers means that Small World 2 is endlessly playable and differs with each replay.

The second master stroke of Small World 2 comes with the ‘decline’ action. Before you start expanding your race across the map on a new turn you have the option to put the active race into decline. This will flip over your race tokens and mean you will score these regions immediately, you will then be free to choose a new race on your next turn and begin conquering once again. Your declined race will remain on the map, albeit limited to one race token per region and will score 1 point per region in combination with the points you score with your active region.

Deciding when to put your race into decline is as important a decision as choosing which race to use. If you stretch yourself too thin you become an easy target and going into decline a turn too late can mean you might have been conquered so much that you score very few points by the time you come to go into decline. Going into decline too early can mean you haven’t fully utilised your race enough. It’s immensely satisfying to know that you have gone into decline at just the right time, scoring the optimum points for your race as well as getting a head start on picking your next race.

The ebb and flow of active and declined races on the map is both satisfying and enjoyable, seeing your once dominant berserker trolls being overtaken by your diplomatic orcs is a pleased mechanic and one which I am yet to tire of playing.

While the game is not going to win any awards for it’s graphical prowess it’s art is colourful and bright, each race has it’s own cartoon fantasy look and it’s appealing enough. I came across some minor graphic bugs such as the text size being too big to fit on the screen when selecting the first race meaning I was unable to read about their special abilities however once I clicked on to a new race and back this resolved. On top of this, on a small screen the race tokens can be quite small and difficult to drag and drop onto regions plus my finger often covered up the information about how many tokens it would take to control a region. These are minor issues which could be cleaned up to improve the over all presentation but nothing which is too difficult to over come through practice plus familiarisation with races and special powers.

Small World 2 has a host of game options which mean you are never short of the ability to play a game when you want. Multiplayer comes in the form of offline and online modes for up to 5 players. Offline play includes a face to face mode in which you and your opponent can sit face to face and play without the need to swing the device around, modes like this really give the feel of playing an actual board game and are something I love to see (Jaipur is another game which implements this kind of face to face play beautifully). You can also play as a traditional pass and play mode on one device as well as connect locally to multiple devices to play with your friends. Online gameplay comes in the form of open matches you can create and join as well as offering a global leaderboard for you to try and climb.

In addition to the base game there are 3 available expansions, which provide around 10 new races and 12 new special powers around a specific theme. All are very affordable and add even more variety to the game giving you even more race and power combinations. I recommend buying all 3 packs as I haven’t played a game without all of them selected since I bought them all.

Overall, Small World 2 is a fantastically fun game. It’s area control at it’s most interesting and every game feels like a fresh new game. Your tactics will change every time you play thanks to the wide variety of random combinations you will see and what works in one game will not work in another. It’s this kind of variety which has me coming back to Small World 2 constantly when I want a quick fix of a medium weight game. I can play a 3 player game in about 10 minutes and feel like I’ve been challenged mentally without feeling like I have been put through the ringer. For those of you who enjoy board games on the go but are looking for something more interesting than another game of Risk then you can’t go wrong with Small World 2. 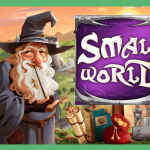