Will this board game adaptation maintain the spirit of the original or will it be blighted with issues in it’s move from the tabletop to the digital tabletop?

Spirit Island is a cooperative area control game which sees you and your friends take the mantle of elemental spirits protecting the island from invaders; hoping to grow in power enough to be able to expel them before the island becomes overrun or blighted by the new visitors. It’s a game like no other that sees you robbing Peter to pay Paul and foregoing future well being in certain areas in order to deal with an immediate threat in another as buying time gives you the chance to become more powerful and better deal with future problems.

In Spirit Island, players will play as 1 of up to 4 spirits on an island which contains 5 different terrain type and a spread of invaders as well as some plucky locals dotted across the map. While the invaders start as a weak group of explorers they quickly and unceasingly multiply and settle across the board before finally ravaging the areas they are in. This is all handled by a deck of cards showing the different terrain types, each turn one card is revealed and added to the invader track pushing the previous cards down into the new areas of building and ravaging. This means that throughout the game you are able to see ahead 3 rounds of the invaders and plan your moves accordingly to limit their impact and give you the opportunity to win the game.

This is the crux of Spirit Island, a game of very few surprises but one of methodical planning, prodding and pushing to buy yourself enough time to deal with the slow and never ending march of your enemy. Thankfully dealing the enemy is what your spirit is built for and this extra time you can create affords you the opportunity to place your spirit’s influence across the island, increasing your reach and helping the locals defeat the invaders. Each influence token placed levels up your ability to play more of your spirit cards or generate power used to play these cards. These spirit cards let you manipulate the board, pushing and pulling invaders and locals in and out of areas due to build or ravage, destroy invader troops and instil fear into them. To put is simply, these cards are the weapons you have at your disposal to win the game, either by expelling the invaders completely from the island or producing enough fear in them that you win.

If the cards you played were as simple as that then you’d wonder whether Spirit Island differs from any number of area control games out there. Thankfully there’s slightly more to it than that which adds a whole new layer of strategy as well as increasing the difficulty of the game. Each spirit card is marked as either a fast power (red cards) or a slow power (blue cards) which dictates whether they will activate before or after the invader will take their turn exploring, building and ravaging. You may have the perfect card to solve an immediate problem you are about to face only to find that it is a slow power and thus it won’t be able to help you now.

It’s just one more way in which the game play of Spirit Island forces you to look one or two moves ahead and balance dealing with today’s problems without completely screwing tomorrow. This push and pull makes for a challenging game in which I seem to lose more often than I win mainly due to the unending and surprisingly quick spread and build up of invaders who blight the land, too much of which will end in losing the game. It’s a tough puzzle to crack and each victory feels more like surviving just long enough to win rather than coming out on top.

There’s plenty more nuances to Spirit Island that I can’t go into fully in this review but needless to say, despite the appealing gateway game look it is not something I’d suggest for beginners and it’s a game that will reward multiple playthroughs in order to begin to develop a winning strategy.

Speaking of the presentation, Spirit Island is a game that I like the look of with some reservations. Like the physical board game version the app version of Spirit Island includes the interesting island design that includes colours as well as varying patterns to discern between each terrain type. This makes for an unusual but interesting game board which I actually really like. It’s nice to see a change from the standard green island game boards you normally see and I was pleased that this art style made the jump to the app.

For better or for worse the design of the pieces has also been ported from the original game and so we are stuck with the slightly confusing buildings which are hard to determine at first glance whether they represent a level 2 building or a level 3 one. This was an issue I had with the physical game so it’s a shame for me that it’s reared it’s ugly head again in the app. Other than that they have been rendered nicely if a little roughly in 3D so you can see that a lot of care has been taken to try and bring as much of the feel of the physical game to the app version. Thankfully Spirit Island Digital also offer the chance to play the game in 2D mode without the slightly confusing at a glace 3D models which is a design change I’m glad Handelabra included in their port.

The wonderful artwork for the spirits and their spirit cards is all here and while it’s a shame that the opportunity to inject some character specific animations for the spirits given their interesting elemental theme, they still make for great player characters.

Options for players are made clear throughout their turns thanks to highlighting of valid moves and while no explanation is given as to why a move cannot be made it’s enough to highlight where it can be made instead. Iconography is clear throughout the game and cards and text is clear and easy to read as well as being expandable should you have any difficulties. Elsewhere I’m a huge fan of the menu system which borrows from the game boards aesthetic to provide an interesting take on a menu which is a nice touch and a welcome break from the simple list you usually find within games. All in all the whole package Handelabra Games have put together is solid, the inclusion of 3D and 2D boards is welcome and just go to show the attention to detail they have when porting games. The minor issues I have with presentation or where I think there are missed opportunities should not detract from what overall is a good looking game.

When it comes to options Spirit Island offers some of what you’d expect while missing some of what you’d want in there. Solo players will be pleased with the volume of options they have when creating a game, 8 differing spirits each with their own unique powers, strengths, weaknesses and ways to win, 4 island set ups as well as added adversary card and 4 scenarios to add depth and challenge to the solo game. Being a cooperative game you are also able to play as multiple spirits on a single device thus allowing local pass and play option or alternatively taking control of multiple spirits as a single player. Setting up a multiplayer is slightly less intuitive as I’d like as you are only able to use one spirit per game board and therefore to add an additional player you first have to add a new game board. Once you know how it’s done it makes perfect sense but the first time I played I spent 5 minutes just swapping out one spirit for another rather than simply adding it.

While the options for the solo player are great there is one massive omission from the game on it’s initial release, online multiplayer. While pass and play multiplayer is available on a device the lack of online multiplayer is a shame. It’s become a standard feature for most board game apps and so it’s a shame to see such a huge release as Spirit Island to launch without it. I know it was available as one of the stretch goals on the Kickstarter for the game so hopefully it’s something we will see added in the future.

Weighing all of the above up makes it tough to rank Spirit Island for me. On the one hand it is a good looking game which is challenging and has a bevy of options for players to keep the game fresh. Each spirit plays differently and the combinations you can put together when using multiple spirits can be brilliant as well as doomed. While I have some gripes about the presentation it’s overall very good and makes for an interesting board game adaptation. On the other hand it’s a challenging game that combines area control with deck building that I found equally enjoyable as difficult to play and while the adaptation of this popular game is superbly done, it was never a game which grabbed me even when I played it in it’s physical form.

Despite all of that, Spirit Island is a fun and challenging midweight area control game that is a good single player experience. If you’re looking for a board game app that has more to think about than Catan but is not as taxing as Through the Ages then Spirit Island is a game worth trying for sure; it’s a popular modern game with an army of fans. There’s potential for future features and expansions and what’s included in the base download here is sure to give you a puzzle to solve as well as the chance to play Spirit Island on Steam (with potential for iOS and Android tablet versions to follow shortly). While I’m generally terrible at the game it’s one that has been fun to lose at. Spirit Island is currently only available on Steam. 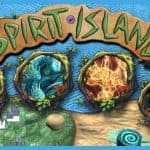