Does this card game have enough tricks up it’s sleeve to excite you?

The Fox in the Forest is a trick taking card game brought to the digital tabletop by Dire Wolf Digital (the team who brought you games like Sagrada and Root). While it’s rules are simple it has a few (excuse the pun) tricks up it’s sleeve with some special powers as well as a core game mechanic which makes this two player card game feel fresh and interesting despite it’s well worn path.

Normal trick taking games turns usually play out with one player leading the trick by selecting one of their cards and the opponent playing a card matching that suit if they can; the player who played the highest card wins the trick and the player who wins the most tricks by the end of the hand of cards wins the game or score points depending on the game. It’s a mechanism you will probably recognise from games like Bridge, Whist or Hearts. The Fox in the Forest follows this same path of trick taking however adds enough wrinkles to make it stand on it’s own as a game as well as making it work well as a 2 player game.

In The Fox in the Forest players start with a hand of 13 from 3 different suits, one of which is selected to be the trump suit. These cards range from 1 to 11 with the odd numbered cards also containing unique abilities which are triggered when the card is played into a trick. These abilities range from forcing your opponent to play specific cards leading you to win the trick as well as providing you with valuable knowledge of what cards they might have in their hand, to switching out cards in your hand or even changing the suit which is the trump suit for the round.

However for me it’s not these card abilities which provide the most interesting wrinkle to The Fox in the Forest as a trick taking game but is in fact how points are determined after each round of play. In normal trick taking games you want to take as many tricks as you can and you score more points for more tricks taken. However where this game flips this is the notion that you can win too many tricks and end up with zero points. The most points are earned in The Fox in the Forest for gaining 0-3 tricks or between 7-9 tricks (which a lower score available for 4-8 tricks won) and as such you either want to win the most tricks but never more than 9 or the least tricks which leads to some really interesting gameplay and some pretty tense moments.

Pushing out too hard and winning so many tricks early on in a round might open the door to an opponent intentionally losing in order to make you go over the 9 trick mark and end up with no points for the round. You may see carefully timed switching of the trump suit leaving you with a hand full of powerful trump cards you really didn’t want to win. There are countless ways in which you can be pushed over the threshold which is why I think The Fox in the Forest works as a game and why it’s able to stand on it’s own despite it being a well trodden path before it.

The game plays until a player reaches 21 points (which can be altered for longer or shorter games) and so it can play out over a number of rounds depending on how many points are scored from the decree as well as bonus points coming from the card abilities.

When it comes to the adaptation by Dire Wolf Digital for the app version of The Fox in the Forest it’s very much exactly as you would expect from them in both the good and the bad. As usual the presentation is excellent, Dire Wolf Digital have long been the best in the business when it comes to providing blockbuster visuals on all of their games. They look great, everything is slick and colourful and they’ve managed to inject some much needed excitement to what is quite basic card game on the table. It’s a game full of animations and colourful pieces on screen that not only look good but provide you easily with all the information you need at a glance. Controls are drag and drop throughout which as always is very intuitive with board game apps and they work fine, although I did have a few issues early on with the specificity of the area I needed to drag the card to play it, a few times I missed the play area fractionally and had to redrag my card, not a huge issue but one that I did notice a few times. On top of that when I first started the game and was still getting used to the abilities on cards I found the hold to expand the card to be very hit and miss especially as my opponent was playing. Again this isn’t a big deal for me especially as the rules are so simple that within 5 rounds I had all the cards fully memorised and didn’t need to do it any more.

The flip side of the coin for this game as with most of the adaptations in recent years from Dire Wolf Digital comes from the AI in the game. Although The Fox in the Forest comes with 3 levels of AI I found myself not only beating these extremely easily from the outset but I was able to maximise my points without any difficulty. In each game I play, even against the Hard AI I will simply allow my opponent to win the first 4 tricks before cleaning up and winning if not all the remaining tricks, all but 1 thus gaining maximum points for myself. It worked time and time again and made playing against the AI both a breeze and no fun for me anymore. This has been a common complaint with the AI in games such as Raiders of the North Sea and Sagrada from Dire Wolf Digital which is always a shame for an app which is otherwise so fantastic.

To their credit one thing Dire Wolf Digital do in most if not all of their digital adaptations which really helps this issue is provide challenges for you to complete in single player which can turn the scoring and play on it’s head. While it doesn’t improve the AI’s play it at least gives you a challenge in the way you play and forces you to switch up the tried and tested methods. It’s not a complete fix but it’s a great addition and something which I’m always pleased to see added to games.

Aside from the single player modes against the AI as well as Challenge mode, The Fox in the Forest adds online multiplayer via a lobby system but doesn’t provide on device pass and play which is a shame especially as most of the replay value of this game will be from multiplayer plays and so not being able to pass my iPad between me and a friend is a pity.

There’s been a real renaissance recently of trick taking games in board games, my board game group regularly plays The Crew and Tournament of Avalon which are both great and interesting takes on what is a style of game that has long gone out of fashion. The Fox in the Forest firmly belongs in the collection for people riding the wave of this renaissance as a great way to play a 2 player trick taking game which might have seemed impossible and no fun for people who like the genre in the past. The digital version does a great job of bringing this game to the digital table top with it’s glorious visuals and slick interface. For people looking to learn the game and get an understanding of how to play in a quick, easy and really well thought out app as well as to play their friend from far away then I can’t recommend The Fox in the Forest app enough, to supplement your play of the physical game. However for those people who know the rules and are looking for a pick up and play experience on the go against an AI just to scratch that The Fox in the Forest itch then it’s a tough sell. When I play my remote 2 player board game night (which is not as often as I’d like) then for sure I’m going to be glad The Fox in the Forest is in my app collection, but it might not get as much play as other 2 player board game apps do where the AI is a real challenge (I’m looking at you here Patchwork)

The Fox in the Forest 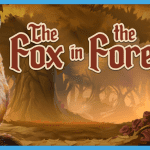