For a board game so in the zeitgeist that even my parents are aware of it; Ticket to Ride made an obvious choice for a digital adaptation did it miss the mark or was it just the ticket?

Ticket to Ride is a card drafting and set collection game with the goal being to complete as many train routes as you can while outscoring your opponents all before you run out of trains. A turn consists of one of three options; draw up to two coloured train cards, build a route, draw additional tickets. Sets of coloured train cards are used to complete the corresponding coloured routes and these routes are used to link cities across the map in order to complete tickets. Points are awarded for each route built and also awarded at the end of the game for each completed ticket, but beware, any uncompleted tickets will result in a points deduction. And that’s the basics of Ticket to Ride, it’s easy to understand, simple to play and appealing to all levels of board gamer.

Ticket to Ride the board game app is a faithful representation of the physical game with the same art style and layout as the board game but with the addition of cartoon avatars and subtle animations. You can clearly see everything on one screen clearly without the need to zoom in or out which is well done considering the footprint of the game. In general the presentation of the game in the app is great, however I would be a little remiss if I didn’t mention the terribly catchy intro music to the game. It’s not bad and actually fits the game really well, it just gets so stuck in my head that even thinking about the game right now while writing this review has me playing it over and over in my head!

A round of Ticket to Ride can be played in around 15-20 minutes and really move along thank to the minimal animations and cut screens being used and although the scoring phase can really drag on especially when you have the full compliment of 5 players, the app thankfully includes a fast forward button to speed things along so long as you are happy to forego the suspense and just want to get the final results.

Ticket to Ride comes with a multitude of ways to play so that you can always get your fix whenever you want it, whether against human opponents or AI. It’s when you play multiplayer games that this app really thrives, offering online multiplayer with either friends or opponents found within a lobby, local multiplayer and pass a play on a single device. With up to 5 players at once you really have the chance to play some challenging and hectic rounds of Ticket to Ride and it makes a great game to bust out with family and friends.

For those of you who can’t find people to play with or simply want a quick solo fix you have the option for single player against computer AI, again up to 5 players. While you can scratch the itch against the AI, don’t expect to be challenged particularly hard by any of them as any seasoned player should expect to win pretty comfortably against any of the 5 different opponents you can choose to face. Not only are the AI not particularly difficult, they also make a lot of puzzling strategic decisions, seemingly completing random and unrelated routes and completely ignoring the ticket cards they have meaning some heavy penalties for them at the end of the game. I’d love to see an improved AI to face however it’s not something I expect to see coming since this game has been out for a number of years already. For now we’ll stick to using the AI as fillers and party poopers for our pass and play games as we try to up the numbers, rather than being a challenge for our solo play.

The longevity of the game really comes down to how much you enjoy the simple gameplay and short playtime. If you are happy with both of these you can find a tonne of content in this app and are easily able to affordably expand it with new maps and tickets available by in app purchase. While these provide some variety you should note that they make no real changes to the gameplay and so don’t expect these to increase replay value once you become weary of the base game mechanics. You can however, find any of your favourite maps to play on so you’re not just stuck making your way around the US.

Ticket to Ride is a faithful and enjoyable port of the physical game and does two things I value in a board game app, speeds up the game play and makes the game easier to play multiplayer. Being able to pull out my board game tablet and play with 5 friends at the pub easily from one device all within 15-20 minutes is a great feat and something I value in a board game app. With an ever expanding number of expansion maps there is plenty of affordable options to enjoy this game for a long time to come. The major issue I have with the game is this simple and inconsistent AI which really limits my ability for this game to feature regularly in my solo board game app playing and holds back Ticket to Ride’s rating for me. A great gateway app for introducing players to board game apps but not one for the experienced solo player. 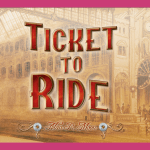