Is this board game app a must by or should you just stroll on by?

Tokaido is a virtual walking game which sees players taking their Japanese travellers on the road through rural Japan, collecting items, paintings, points and food as well as gaining favour with the Gods so that they have the most prosperous and varied life before they reach the final destination.

Gameplay is exceptionally simple to pick up, the player furthest to the back of the party decides where they want to stop next, they arrive at one of the buildings and either spend money to gain items or favour or gain gifts which they keep to enrich their lives. Once a player has moved the turn defaults to the player at the back of the group once more who now decides where to go, the caveat being that they cannot end up on the same space as another player. Therefore you group of travellers leapfrog each other along the path, trying to fit in a much as possible before getting to the next inn which acts as a gathering point.

It’s an extremely light game where your only real tactic is determining how soon you want to jump to the next inn so that you can be the first out on the road again. Getting to an inn first means you are first out of the door once everyone else has arrived and so you can steal a march on the prime locations you need to hit next.

If there’s one thing that stands out with Tokaido it’s undoubtedly the presentation. The physical game of Tokaido is a nice and minimalist jaunt through some coloured dots on a white background which is fine and works well, however the digital adaptation far surpasses this in every way. The Tokaido app is a walk through a beautifully animated snowy Japanese scene, each dot replaced with a cute and stylised building and each meeple replaced with an amazingly designed traveller character. The 3D models subtly explode off your screen despite the understated colour palette and are a joy. It truly is one of the better looking digital board games and goes to show that changes to the aesthetic of some of the board games is not necessarily a bad thing and something that other adaptations may want to try.

In terms of player options Tokaido offers single player and pass and play options on the device as well as online multiplayer. Both worked reasonably well for me however lack of a user base online meant getting a game was tricky and I had to enlist a friend to help me test it. The AI is one level but thankfully the lack of hardcore strategy means that they pretty much do as you’d expect a human player to do; however this highlights what really is the main problem with Tokaido for me.

Outside of the look and feel Tokaido you’d be right to question whether there was enough depth to a game that sells itself as a walk in a park. You’ll probably see a lot of reviewers cling to the idea that Tokaido is about the journey rather than the game, that it’s a casual escape from the cut throat world of euro games; however it’s within this lack of strategy and depth to the game where I really have my issue. You see, there is a strategy to Tokaido, there’s a clear and defined way to win and as such players who know the strategy will beat those who don’t nearly every time. When you face someone else who knows the game plays out in such a way that even if you end up on the losing side you can look back and say that you wouldn’t have played the game any different, it’s just how that game went.

The problem I have with that is that it’s the exact description I give to the game noughts and crosses (tic-tac-toe) which is not a game I have taken any joy in playing since I was about 6 and discovered the way to both win, and to never lose. And while board games really are about the playing and don’t necessarily just about winning, if you take it away then it all seems rather pointless.

Tokaido looks fantastic, it really does, the team at Fun Forge have done a great job not only bringing the game to our devices but exceeding the aesthetic of the physical game with a charming and cute game that breezes along as lightly as the gameplay and strategy itself. That aside the game feels to me like going through the motions from turn one until the last, there’s rarely more strategy than simply going to the next available space for you and by the time I’m finished I can’t seem to understand why I bothered. Tokaido is a calm and beautiful game but might just be too calm to actually make it any fun. 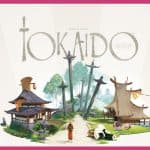