It’s hard to know where to start when discussing this 2 player war game based around the Cold War. The physical game has been an every present in the top 10 board games on Board Game Geek since it was released and is considered to be one of the best and most in depth games out there; so when I heard that there was going to be an app version of Twilight Struggle I was excited to say the least.

I had played previous digital versions of Twilight Struggle both online on a a computer with my friends, they were great adaptations and enabled me to be able to play the game with some of my more war game minded friends from around the globe. However these versions lacked a lot of the polish you get from a professionally developed game and so that it was I was hoping we would see from this port to our devices.

Twilight Struggle is a 2 player game which takes place during the Cold War. Players take charge of either the USSR or the US and compete for influence across the globe with the aim to meet one of the many win conditions while also avoiding one of the many losing conditions. Actions are handled by playing cards in turn, each of which has a military value and an event which can either be positive for the USSR, the US or both. Your military influence is spread across the globe and is tracked over all for each continent. Throughout the game cards can be played which will score these continents based on who has the most influence in both the region as a whole as well as in some key battle grounds, giving players victory points for presence, domination and control.

One of the interesting features of Twilight Struggle is that victory points are not the only way in which a player can win a game. Yes, a race to 20 victory points will net you a win however you can gain a victory by controlling the key continent of Europe and then scoring it, by playing certain cards after you have met conditions on them which will instantly end the game in a win for you, degrading the DEFCON track to below 2 therefore causing a nuclear war or by surviving until the end of turn 10 and having the most victory points when all regions are scored at once. The fact that there are so many ways to both win and lose a game of Twilight Struggle means that unlike in other war games such as Risk, you can’t simply depend on spreading influence across the globe. The delicate ecosystem of spreading military influence without causing the DEFCON level to degrade leads to interesting decisions. Often times I will find myself succeeding dominance in a continent to my opponent and losing a huge 6 or 7 victory points in the knowledge that I will be able to spend my influence breaking their dominance in 2 other regions instead. Never has a game handed me so many decisions, often times where every outcome is a bad one for my cause, and had me decide how to best deal with the consequences.

The key to these tough decisions lies in the frankly brilliant cards you use to play the game. Each card has a military operations value between 1 and 4 and an event which will do any number of things to the game. The events are either a USSR event, a US event or a neutral event and benefit the team based on their event. Where the brilliance of these cards comes is in how you play them. You can choose to play a card for the military operations value and then spend this influence across the board, couping enemy countries or attempting to remove their influence from countries. Playing a card whose event is either neutral or for your nation (either US or USSR) for it’s military operations value will mean you forego the event associated with the card. However playing a card with an opponent’s event for the military operations will cause that event to fire therefore giving your opponent a positive action on your turn.

You are forced to balance the impact of your opponent’s event against the volume of military operations the card can give and decide whether you can suitably repair the damage the event will cause or push on with your plans for the operations. Such a simple but smart mechanism can often times leave you with a hand of cards where there are no good moves for you and you are deciding between a bad move or a bad move and this is the true genius of Twilight Struggle. Given that the early part of the game is weighted towards the USSR player, the US player can regularly find themselves simply trying to trigger their opponent’s events in an order that least gives the USSR a sizeable lead heading into the mid or late war at which point the balance of power switches towards the US with the introduction of additional cards, more of which contain powerful US events.

As you can see, Twilight Struggle is quite a complex and deep game. The barrier to entry is intimidatingly high and although the app provides a reasonable tutorial for a game it can’t really teach you the nuances of the game and provide you with the knowledge you will need to get from playing the game a bunch of times. Twilight Struggle is an app that rewards multiple replays, it’s similar to a game of chess in which the more you play the more you will begin to recognise some standard moves and understand the counter moves you can play.

The first few times I played Twilight Struggle against my more experienced friends I was resoundingly beaten, I set up my board in a sub optimal way, I played cards too early or too late, I didn’t consider that cards get reshuffled into the deck at set points throughout the game thus reappearing for a second and sometimes third time. All of which I began to understand when I got to my 10th, 20th and 30th game played. I now know how to set up my board based on my opening hand, I know the exceptions to the rules and I also have my own unusual tactics developed based on special hands I might receive. I know when to admit defeat in scoring regions and know which cards to hold onto and discard after a reshuffle, banishing them to the discard pile for the rest of the game.

In terms of playing the game it’s truly a marvel that they have been able to fit everything onto one tablet screen let alone the fact it is playable on a phone screen. Everything is visible and expandable on one screen although I will admit there is a learning curve when it comes to figuring out where to look for things and the iconography they use. One a phone screen writing can be really small which is not a huge issue once you learn what each card does however for beginner players you will have to read each card probably multiple times which can be a real struggle on such a small screen; therefore I do recommend playing on a tablet when you can, you’ll thank me for the extra real estate.

Similar to the physical version of the game, the art work is nothing to write home about, it is functional and utilitarian but does the job. Animations are minimal but add some nice minor touches to the game and menus are simple and clear. Let’s face it, you’re not playing Twilight Struggle for the look but don’t let that put you off the game and don’t let that lead you to think this game isn’t dripping with theme. Not only is each card unique, they are also based on real Cold War events, along with that the tension you feel across the globe that nuclear war is coming while trying to do all you can to avoid the conflict is a sign that I am truly invested in the theme while I play which is a great success.

Twilight Struggle features a solid AI which is a great way to learn the game. The AI plays in a pretty standard way but this is fine as it plays cards, influence and combos in much the way human players would play based on the current accepted strategies. Don’t look for your AI opponent to try any outside of the box moves against you but be prepared for a good challenge none the less. Single player against the AI is really just a practice ground for the true meat of this app which is the online ranked play. Online multiplayer has long been a hall mark of Twilight Struggle adaptations and this app is not different. Play against friends or find ranked opponents in live or asynchronous play with a timer that can go as long as 45 days. Due to the act and respond nature of the game itself Twilight Struggle makes a great game to be played over a long period of time online; with so many options available to each player having that thinking time leads to better games and a more invested set of players. With a huge online community for Twilight Struggle even before the release of this board game app; there is never a problem finding people to play against of all levels and the fact that it has brought all of the fans of the game under one roof has made Twilight Struggle one of the best online board game apps we have played.

If it’s not already apparent, I’m a huge fan of this game. Many a day I have lost trying to wrestle control of Central America while fending off the USSR advances into Western Europe with my friends. The game is a huge amount of fun and wildly stressful at times. This app adaptation does an amazing job of porting what is quite a complex game, it deals with a lot of the annoying book keeping and calculations that can bog down the physical game and makes playing a game of Twilight Struggle significantly quicker which is always a bonus for a game that has been known to take up to 4 hours at times. I must caveat this review with the fact that this is not a game for everyone. If you enjoy a lighter game with a singular win focus, or struggle with analysis paralysis then this probably won’t be the game for you. If, on the other hand, you are a fan of in depth games, full of theme, where every single decision you make will see it’s impact echo through the remainder of the game, whether you make the decision on turn one round one or turn ten; or simply a fan of Risk and are looking for a better way to play a war game (check out our article on this topic here), then Twilight Struggle is the app for you. 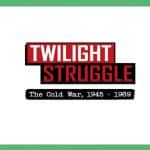