Have they crafted a wonderful card game on our phones or should Mystic Vale be put out to pasture?

While Mystic Vale is described as a card crafting game you’d be forgiven for not knowing what that actually means. You are probably familiar with the term deck builder when it comes to board games, and Mystic Vale does share loads of similarities with these type of game however what sets it apart is that you don’t spend the game buying new cards to bulk out your deck with more powerful options, you add abilities to your current cards themselves in a mechanism that the designer refers to as card crafting. Therefore, Mystic Vale is a card crafting game which sees you competing as a clan attempting to purge the land of a curse that has blighted it.

Every player starts with a deck of 20 cards, each with 3 sections, a top, middle and bottom. Most of these cards are completely blank however 9 of them have a third of the card already full with a one in game currency (mana) and one curse symbol and 3 others just have the mana. Your aim is to use that mana to buy card upgrades and fill in the 3 spots on each card with more and more powerful abilities, gaining you additional mana per card, symbols to buy special Vale cards and giving you a way to fight back curses as well as providing you with all important victory points. Once the shared supply of victory points has been exhausted, the player the with the most is crowned the winning clan.

A player will flip cards one by one, first placing them on top of their deck before moving them into their field until the count of curse symbols within both the field and on top of their deck is 3. You are then able to spend the mana, any symbols and take any actions amassed from the cards contained in your field but not including the ones on the card atop your deck. Should you wish to push your luck and turn more cards in the hope of adding to your available mana to spend you can do so however be warned, turning over a 4th curse symbol will cause you to spoil your field, finishing your turn and immediately discarding all of the cards you amassed in your field.

If you choose not to gamble you then get to spend you available mana on up to two cards from the card array, these all have various symbols, additional mana or special abilities and come in 3 forms, a top, middle or bottom section which denotes which section of your card their powers will sit. Buying cards from the array will add their powers to a card of your choice from your field and upgrade one third of the card so that next time it is drawn it is more powerful. Adding more mana gives you additional buying power enabling you to buy higher value card upgrades, adding more symbols gives you the chance to buy Vale cards from a second array. These Vale cards provide one time abilities to help you survive spoiling, add permanent mana to your field or simply give you additional VP which doesn’t diminish the shared pool. How you choose to craft your cards, which upgrades you want and which strategy you choose to use in order to gain VP is the crux of Mystic Vale. It’s a deck builder in essence with a fascinating twist which I hadn’t seen before playing the physical version of the game and one that I’m glad to see has made the jump to the digital tabletop. While it might sound a little confusing at first, it’s actually a pretty simple mechanism that will feel familiar to a lot of people thanks to it’s resemblance to other deck builders however the crafting element adds a new twist on this well trodden path.

When I heard that there was a digital adaptation of Mystic Vale I was pleased and reticent in equal measure. How Nomad Games was going to present this game was going to be super important especially given how the physical game is. If you’ve not seen the physical version of Mystic Vale, one of it’s huge selling points is the interesting deck of cards and the upgrades which are printed on thin pieces of clear plastic. It’s this clear plastic that means that you can build up your card with upgrades in the top, middle and bottom of the blank cards and still be able to see all of the symbols and artwork for each upgrade. It was a system I’d never seen used before and was super satisfying to be able to slot in 3 upgrades onto your card, see everything in place and feel the new weight of your upgraded card in your hand as you turn it over on the top of your deck knowing that it is going to be something good.

My fear with a digital adaptation was that you’d lose some of this magic and some of what made the physical version of Mystic Vale such a joy to play. Unfortunately this is something that you just can’t replicate in a digital form and so the game lacks some of what made it special on the table. However aside from that Nomad Games have made an app that does wonders at not only capturing as much of the feel of the physical game as they can but also solves one of my biggest issues with the game as a whole, how much of a table hog it is. By the time you have laid out the 2 different arrays of cards, your players fields, victory point tokens, draw piles and discard piles for each player, Mystic Vale looks like a mess of cards all over the table and takes up a tonne of space. Thankfully the app version manages to keep everything well organised with all information just a swipe away. Never did I feel like I was missing out on vital information because it wasn’t visible to me and splitting the screens up between Vale cards, upgrades and player fields feels like a natural break that works well with all of the phases of a players turn.

In addition to the user interface, the artwork for Mystic Vale not only matches the original game but has been brought to life by subtle but beautiful animations on the cards. While these are slight movements, it’s a lovely detail to see in the over all presentation of the game. While the artwork, iconography and animations can sometimes make the screen feel cluttered, especially on smaller devices, it was never a problem understanding what’s going on or what anything did. It’s a good looking game that has been well implemented on our phones and tablets.

When it comes to game modes available there are a number of options for both single and multiplayer games. There are options for real time online multiplayer games as well as pass and play on a single device which is always gratefully received in an app. For the solo player you can play against up to 3 AI opponents with 5 difficulty level ranging from easy to punishing. The AI is very solid, a push over on the easiest level all the way to difficult on the higher levels. I’ve always been able to enjoy a challenging game against the AI opponents but never felt like I was being cheated out of a game either by them making foolish mistakes or by the AI getting overly ‘lucky’. You are also able to play the game at it’s standard length or an extended version of the game with a much larger pool of victory points to attempt to gain. This extended version of the game is a welcome addition and is now how I prefer to play Mystic Vale. In a normal game I would often finish feeling like the deck of cards I had built up had never quite reached it’s potential and that I was a few turns away from being happy with the system I had created. With the extended version of the game I’m able to plan for the long term and see my carefully crafted cards provide more mana than I can spend and allow me generate a victory point taking engine. It’s satisfying to see the game play out over the long term and although it over doubles to play time from around 15-20 minutes up to 30-45 minutes, it’s still my preferred way to play.

Mystic Vale comes packaged with the first expansion for free, Vale of Magic, which provides you with more cards to include in your game to add variety. It’s nice to see Vale of Magic included as part of the purchase price and frankly I struggle to distinguish which cards are part of this set and which are from the base game as it’s a must include when setting up a game. The cards it adds are simple to understand and add much needed variety to the base set which can get repetitive without. Don’t be afraid to include Vale of Magic even if you have never played Mystic Vale before, it’s an easy expansion that doesn’t change the core mechanics and just adds more of what we like to the game.

Currently 2 expansions, Vale of the Wild and Mana Storm are available for in app purchase and do more to add new elements to the game itself rather than just additional cards. Adding leaders, amulets and transparent abilities add plenty to the core game and are worth the additional price. I favour what Vale of the Wild brings to the app if you were choosing between the two, as leader cards add a great new mechanism and give you interesting new options for you to use to build your engine; and you of course still get a plethora of new abilities and upgrades thrown in. Since downloading the expansions I find it difficult to play the base game without them, they add enough to make it a more interesting game without adding to the complexity and both really extend the longevity of the game, I for one hope to see more expansions make their way into the Mystic Vale app.

Overall I’ve thoroughly enjoyed playing Mystic Vale, the app version is an excellent representation of the physical game which I like. The presentation is great and the app does a good job of fitting what is a tonne of information onto my small phone screen. In terms of game play, it’s as fun as ever; although newer players may feel like they are simply randomly picking the most expensive upgrades they can afford and hoping to win, more experienced players will begin to see the various strategies involved in crafting your cards in such a way that they can combo off each other. Sometimes taking cheaper cards works better with your deck than filling them with the highest priced upgrades you can while not being able to fully use those powers. One game could see me drawing every card in my deck each turn and converting that mana into VP, another game can see me buying every Vale card and winning without taking VP from the pool. It’s a game that looks like luck on first glance but sees players with a purpose winning time and time again.

If you like deck builders and fantasy theme then you are going to love Mystic Vale, a card crafting game that has me settling in for extended games with as many expansions as I can add in at once because I can’t get enough. And while it’s not the lightest weight of game it’s one that isn’t going to be so taxing it should put off newer players at all, one for your collection for sure. 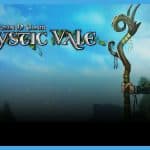