Potion Explosion is a set collection game that sees players taking ingredients, causing chain reactions and fulfilling potion recipes. The physical version of the game was a revelation when I first got it to the table thanks to it’s innovative marble dispenser and fun mechanics, I was therefore justifiably concerned when I saw a digital version of the game hitting our devices, wondering whether an app could capture the magic of the physical game.

The game has mechanics anyone similar with games such as Candy Crush and Bejewelled, you take a single ingredient from one of the tracks and the remaining ingredients move down to fill it’s place revealing more from out of sight. Any ingredient which moves down and touches another of the same colour will cause those to explode and move into your stash. This can cause a chain reaction of explosions as more and more colours touch and your stash of ingredients grows. Once these chain reactions have finished you are able to assign your ingredients to one of your two potion recipes, attempting to fulfil the requirements, gaining the VP and gaining a potion with a unique ability to help you get even more ingredients on a future turn. Rinse and repeat this process until players have made enough potions to trigger the end of game scoring where VP is added and a champion is crowned.

The strategy for this game lies in the potions you choose to complete and the additional powers they give you. If you build up a bank of potions that enable you to take a lot of additional ingredients you can choose to complete larger potions in the future for great VP, completing potions that enable you to steal from your opponents means you can race to the end conditions of the game knowing they won’t be able to keep up with you seen as you are stealing all of their spare ingredients. It’s a game subtle on strategy which rewards the ability to spot and visualise good chain reactions from the board however it is not totally devoid of it.

Potion Explosion looks good and as built around trying to make the game as quick and easy as possible. Including buttons to automatically fill your potions from the available ingredients you have just go to show the importance that has been placed on pick up and play with this game. With a play time of between 5-10 minutes it’s an board game app that’s there to compete with other filler apps, giving you a light starter or finisher game before you get into something more meaty.

The art style for the game is cartoony and matches the theme well, however the biggest challenge it faced was not only looking good but being compared to the physical and trying to maintain some of the magic of the marble dispenser of the physical game within a digital format. Pulling an actual marble and seeing more and more fall down the track as you remove matching ones was a real joy; it made for great viewing as an audience and was something I’d not seen before in a game. Sadly I don’t get quite the same feel when I’m doing the same on my phone, yes the explosions are always nice to see but it certainly lost something in the move to the digital tabletop. It feels far too similar to games we’ve seen before on a phone whereas it was something new in it’s physical form.

In terms of options available, Potion Explosions has both offline pass and play multiplayer as well as online. The online multiplayer has both ranked or unranked games however has such a limited online usership that I was unable to regularly find games without organising them myself. Thankfully the inclusion of pass and play multiplayer means that I was able to enjoy this locally on one device and it worked great. For solo players you have the option to play against up to 3 AI of varying difficulty, they are totally serviceable opponents if not ground breaking, but will provide enough challenge for the quick pick up and play games you will find yourself having with Potion Explosion.

In addition to the base game where players have up to 8 potions to start a game, Potion Explosion includes expansions available for an additional purchase, they add more potions, additional gameplay mechanics and updated scientists which provide in game abilities to assist or hamper you. If you enjoy the base game than the expansion is a must purchase as it simply adds more of what you like to the game without changing too much.

Overall Potion Explosion is a fine adaptation of the board game which suffers in comparison to the physical version. While the mechanics and gameplay are all in there, the lack of the physical components takes away the one thing that made the physical game so fun. While the app looks good and has additional content for those of you who get hooked in, it just never reaches the heights I experienced when playing the original in a group. For those of you interested in light filler games that haven’t played the physical version the Potion Explosion is one you should really consider, if you aren’t one of those people then it is a fun but flawed experience. 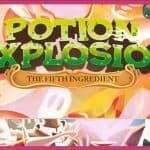