Is this digital adaptation a one for the ages or should we just rush on through this review?

When I heard that Through the Ages was coming to our devices I was concerned, very concerned, and for more than one reasons. Not only is Through the Ages one of the top rated games on BGG, and has been consistently since it’s release, but it is perhaps the weightiest game that as seen the jump to the digital tabletop. Despite my worry Through the Ages digital has done something that very few games do when they make the leap, it has not only improved the game, but actually replaced the physical version of the game completely, and that is no small feat.

Through the Ages is a civilisation building game (in fact it feels to me like the old computer game Civilization 2 but in a board game) which has elements of card drafting, worker placement, tableau building and resource management. With so many mechanics going on at once you can see how tricky it is to bring to our devices let alone describe how the game works as part of a review and therefore I will do my best to give you an idea of how Through the Ages plays but to truly learn you should take the built in tutorial which is not only fantastic at teaching you ever aspect of the game but also adds some genuine humour to proceedings, the like of which we haven’t really seen in tutorials before.

The aim of Through the Ages is to build up your civilisation by increasing your production of 4 main resources, grain, stone, science and culture while increasing your population and protecting your civilisation through it’s military. Though you utilise grain, stone and science to play cards, build buildings, increase population and upgrade everything the key to the game is culture; as the winner of the game is the player who has the highest culture once the game is over.

Decisions are driven by a draftable deck of cards which help you upgrade buildings, improve your resources, manage your workforce or provide quick single use injections of resources. The variety of cards and their abilities are extremely varied in Through the Ages so I can’t go into detail about all of them here but needless to say, they provide multiple avenues for victory as well as offering you with enough flexibility to counter any play made by your opponent.

The driving force of a game of Through the Ages is the card track which sits atop the board throughout. This is a forever moving selection of 13 cards, the bottom 3 of which are discarded at the end of each turn and the remaining cards replacing them with a further 3 added at the opposite end. There is a sliding scale of cost of cards from left to right which is the key to why this mechanism is successful. If you leave a card for a few turns so that it drops down the track thus reducing it’s price you run the risk of your opponent taking it come back round to you. Not only that you have to make sure that it won’t drop into the bottom 3 cards before you turn otherwise you risk losing it to the discard. It’s fiendishly simple as a mechanic but it makes for some fascinating game theory.

A turn plays out over 3 phases, Politics, Action and Production. Politics allows you the chance to add a political card to the back of a track of cards to trigger at a later turn providing you with a potential benefit should you be able to fulfil the criteria before the card shows up. The delayed gratification of the political card track would make for a fun interesting scrabble on it’s own as you attempt to keep ahead of the criteria lest you fall foul of your own card in a few turns time, however the fact that with every card played to politics a previously played card is activated, means that you have to consider very carefully whether you hunt for those culture points for a few turns time at the risk of taking a hit in them right now.

Once you have decided whether you will or won’t play a politics card this turn you are moved to the Action phase of the game. Based on your current government (I won’t go into this in this review) you will have a certain amount of action points to spend which you will have to juggle to draft cards, build new technologies, upgrade your current production, build wonders, increase your population and draft in the military. The amount of choices you have to make is quite daunting and the volume of things you have to juggle means that often you can’t just take the best cards available and play them; you have to upgrade technologies so that you can produce more resources by using less workers so that you can keep your population from revolting and destroying a building, you may have to complete a wonder to free up blue crates so that you don’t suffer corruption and miss out on vital production. You have multiple tracks to balance all while trying to push to civilisation forward and you have to do this with what seems, from the first turn to the last, to be far too few action points to spend.

Finally once you have exhausted all of your action points you can finally reap the rewards via the production phase in which your civilisation will produce the 4 resources ready for you to spend the following turn, assuming they aren’t stolen from you via a political war from your opponent.

That really doesn’t even begin to scratch the surface of what Through the Ages has to offer and why it’s such an in depth game, in fact it doesn’t even cover enough rules for you to be able to navigate your first turn. But what it hopefully covers is enough to know that if you’re looking for an in depth civilisation building game that is one for the heavy board game fan then you could well be in the right place.

When it comes to the presentation of Through the Ages I often describe it as efficient rather than beautiful. There is nothing wrong with the way it looks, there’s some nice character work with the leaders and card art but the rest is very much an exercise of trying to fit a large game onto a small screen. What it fails with aesthetics it succeeds with in condensing and it is a triumph that you can play the Through the Ages app easily on a phone without having to strain yourself. My only criticism would be with regards to the decisions made with buildings and how they are laid out and look. When you are struggling with space on a device it seemed like an odd choice to have so much empty space on a player board and the fact that buildings weren’t laid out in a more functional grid rather than the way they are within Through the Ages. Clumps of buildings with lights inside indicating that they are active, while functional, does make it confusing especially for new players.

Aside from this the rest of the game is set up clearly and well, with all the relevant information either immediately visible or one click away. Controls work very well and although some drag and drop elements can be quite small the option is always there to click and use button selections instead for the fatter fingered amongst us.

When it comes to game options Through the Ages provides a robust multiplayer fare with both online multiplayer as well as pass and play on a single device. Both work really well and are highly recommended ways to enjoy the game. The online community is not only large enough to support regular games but also extremely challenging and dedicated, the fact that Through the Ages is listed so often in the top board game apps conversation means that it has drawn board gamers from all over to enjoy it online and the challenge has come with them.

Single players need not worry because there is 4 AI levels to play against, a training one that physically handicaps your opponents and then your standard easy, medium and hard AI. They are extremely challenging for new players as there is definitely a learning curve with Through the Ages so you won’t be without fun games to play against the AI for a while. On top of this the game comes packaged with challenge mode with offers 29 games with varying rulesets and challenges to complete ranging from the simple such as beat an easy AI to the difficult. It’s a great way to keep a game fresh after multiple plays.

One additional way in which the game longevity can be increased is through the available expansion which includes plenty more of the same, with new cards and scenarios to play through. I enjoy expansions that add something to game play but I’m equally pleased with those that just add loads more content which is more of the same, and for the price of £4.99 you can get so many more options to your game it feels like a no brainer to me.

It goes without saying the Through the Ages is an impressive board game app that packs in a whole bunch of strategy into a game that can be played seamlessly on my phone. Not since Twilight Struggle has the digital tabletop seen a board game adaptation that comes with such complexity and weight that is handled as well. In fact Through the Ages the app handles the game so well that it actually surpasses the physical game. The app handles some of the trickier book keeping and resource juggling, deals easily with the corruption and military events and makes everything not only easy to understand and follow but thankfully simple to undo thanks to an undo button. Unlike the physical game you can run with trains of thought and plans before undoing them once you realise there is a better move to make. You can see exactly how much you’re going to gain in income each turn as well as what you need to do to stop corruption. It’s a fantastic improvement in a game that often gets bogged down in book keeping and calculations making it a drag to play.

There is a reason why Through the Ages finds itself a top so many lists of the best board game apps so often, it’s smart and challenging, deep and weighty and most importantly it’s fun. If you are new to the world of board games and board game apps you might want to work your way up to this one but once you do I think you’ll agree that Through the Ages is a fantastic digital board game and one worthy of the high rating. 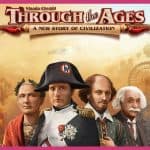