Has this adaptation of a beloved board game succeeded? That’s up to the Gods to decide (and in this case also me)

Concordia is a game which sees you taking control over competing Roman dynasties racing across the globe to develop the most impressive and expansive economy and empire, currying favour with the Roman Gods in exchange for VP. The dynasty that becomes the most impressive as well as pleasing the Gods will gain the most VP and be crowned the winner.

Each player starts with two colonists, one for land and one for sea, one of each type of the games 5 different resources, a small amount of money and a personal deck of cards. It is these cards which provide the actions available throughout the game, initially providing each player with exactly the same actions as one another however as the game progresses and players buy additional cards gives each player their own personal set of cards to utilise in building their empire. On their turn a player can play one of the cards remaining in their hand and take the action on the card. These actions allow players to buy and sell goods in the market, move their colonists around the board building settlements on cities they arrive at after paying the relevant cost in resources, activate regions on the map and gain resources from not only the region but also any cities you have built settlements in that region, buy additional cards directly to your hand which offer slightly varied and improved versions of the above actions and finally draw up your discarded cards back into your hand to be able to play again the next turn.

Players must manage the cards they play and when they play them in order to optimise their turn and make the most of these limited number of actions. Play your architect card to move and build before you have the required resources to build settlements and you end up missing opportunities to build which are few and far between. Play your senator card to buy up to 2 new cards at a time when you can only afford to buy 1 card and you waste half of the senator’s action. Concordia is a game of margins as well as a game of limits; limited cards for players, limited available slots to store resources, limited money throughout the game. How you push these limits and make the most of your actions will determine your successes in Concordia.

In a wonderful twist to the game, the cards you start with as well as the cards you purchase are not simply a single purpose card displaying the action you are able to take but also have one of 6 Gods on them, determining the favour you hold with each of these Gods. Because, in Concordia, it doesn’t only matter how much of something you possess at the end of the game that determines how much VP you score for it but it is also multiplied by the number of the matching God you have on your cards. For example, the God Mars provides 2VP for each colonist you have in the game (which you are able to recruit up to 4 additional ones with various actions). If you had 3 colonists at the end of the game and 4 cards which had Mars on them then you would score 24 VP; 6 for the 3 colonists multiplied by the 4 copies of the Mars cards you have. What this mechanism does so wonderfully is provide a tough decision for you as you go through the game. Building the most expansive empire may provide you with huge VP for what you have built but if you neglect to buy additional cards and thus increase your God multipliers then you won’t gaining enough VP to win. This works both ways however as buying as many cards as you can at the cost of expanding your empire will leave you with massive multipliers but on low scores. It is this balancing act of expansion vs gaining favour that is extremely interesting in Concordia. Building an engine that can provide just enough resources and money to maximise your actions while snapping up relevant cards to multiply your scores is the crux of a winning strategy.

When it comes to the digital version of Concordia the developers Acram Digital have done a fantastic job of translating the game to the digital tabletop. Not only does the presentation of the game match the physical version well but Acram have added their usual level of polish to the game with flourishes that really bring the game to life on your device. The quasi 3D map allows for easy navigation of your colonists in the game with the ability to zoom in and out smoothly to get an overview as well as more easily and accurately make selections. I enjoy the contrasting 2D flat city and colonist markers which litter the 3D map which provide easy to understand iconography at a glance.

The UI for the game smartly provides you with a tonne of information at a glance while cleverly hiding the more in depth things a click away meaning that the map is the most prominent thing you see. At no point while playing the Concordia app did I find myself wishing that something was more prominent on the screen or that another thing was hidden away which is a triumph of design. In fact the inclusion of optional extra stats showing is included specifically the ability to see a running tally of scores for all players should you wish. This running tally is in contrast to the physical game where VP are not tallied until the very end of the game leaving you in suspense as to how well you and your opponents are doing however the inclusion of a toggle option to provide this information throughout will suit some players and can be a big aid for beginners learning how to play and score well.

It’s actually within the scoring of the game where I find what I believe the biggest room for improvement with the app version of Concordia. As I’ve mentioned the physical version of the game culminates in an exciting incremental tally of scores as each God is scored and players move their markers across the score track. This method of scoring builds tension as the lead is won and lost as each new scoring category is scored and the God multipliers are applied, it’s one of the most fun aspects of a game like this. The app version of Concordia does away with this, immediately providing your total score as well as where you’ve placed against your opponents. You are able to dig into the details of your score and see where you made your points (although I also wish that there was more of a description of what these categories were rather than just the icons representing them as even after 20+ games I still can’t remember what they mean) however a lot of the climax of the game is taken away from us by the decision not to include this cumulative scoring. Even something as simple as seeing score slowly increase as each category is revealed would give us the same feel as the physical game, something akin to the scoring we see from board game apps such as Sagrada would work great here and should be something relatively easy to replicate. This feels like a minor gripe in a board game adaptation that does nearly everything else right however not a game goes by where I don’t wish it wasn’t included.

As always, Acram Digital provide us with multiple ways to play, both online and offline multiplayer as well as solo against up to 3 levels of difficulty AI opponents. Online multiplayer offers async play as well as cross platform compatibility which shockingly isn’t standard with board game apps at this point. The AI opponents locally do a great job of providing a challenging experience with the easy AI offering a very beginner experience and the hard AI giving a good challenge to even a more experienced player. The AI makes smart decisions without feeling like I’m being cheated the whole time and while I win more often than I lose it’s always extremely close, with me getting blown out of the water on occasion.

The app launches with the base game of Concordia including an alternative map allowing for a varied and tighter game and Acram have committed to bringing all of the expansions to the app with the first scheduled for November 2021. I’m a huge advocate of expansions within digital board games; the fact that app versions of games are so much easier and quicker to play means you will play an app board games hundreds of times more than you play the physical game and so things can become stale far sooner with an app than the physical game. The addition of expansions helps alleviate this, providing additional content, mechanisms and much needed variety and the fact we have all of them coming shows a real commitment to development of Concordia digital and should be commended. I’m already looking forward to buying the first expansion and changing the way I play. The lack of expansions was my biggest criticism with one of Acram Digital’s previous offerings Istanbul and while I very much understand the reasons and costs involved when making decisions about bringing expansions to games I’m relieved to see that they are forging ahead with Concordia.

Overall the app version of Concordia is a triumph; it is polished and great looking on the screen and plays smoothly and quickly with games lasting 15-20 minutes. As a game I thoroughly enjoy an empire building game which is set in peace times, were trade is the order of expansion not military might. The mechanisms involved as well as the interesting and unique scoring make for a game packed with challenge and decision making while managing to stay light of rules and complexity. It’s an economic game that doesn’t get too mired in analysis paralysis and while turn optimisation is key it’s never crippling. Concordia sits nicely as a medium weight game which certainly helps make me want to play it again and again and the app version has been so lovingly created I end up playing it again and again. I would absolutely love to see an overhaul of the scoring run down to take this app to the next level and replicate one of the best features of the physical game however even without that this app has done a great job making the move to the digital tabletop. If you can’t tell already I’m a huge fan of this adaptation, it’s not often I’m so blown away by an app version of a game when I’ve not already played the physical game a tonne but this one has made me want to get the physical game to the table which is high praise indeed. I would absolutely recommend Concordia for your digital collection, whether you enjoy heavy economic games or lighter games I think there’s definitely something for you to find here and it’s a must own for me for any board game app fan out there. 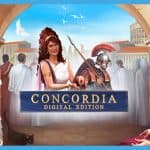