Is this the one dungeon crawler you’ll need on your device or should you lock it up and throw away the key?

I’ve finally managed to drag myself away from One Deck Dungeon long enough to write this review, which in itself is a bit of a spoiler for how I feel about this app implementation of this card game. One Deck Dungeon is a simple dungeon crawler in which you level up your character as you explore a dungeon; hoping that you will be powerful and equipped enough to beat the dungeon boss by the time you manage to reach his level of the dungeon.

This is all handled wonderfully via a set of monster/obstacle cards which make up the dungeon, timer tokens which get spent to perform any action and finally via rolling dice for combat, lots of dice! As you explore the dungeon you will turn over cards to reveal monsters or objects which you can choose to face. Each monster or object has a specific requirement of dice, both colour and number, you need to roll in order to defeat it. Any dice you fail to roll will lead to loss of either health, time or both. However surviving the battle gives you the chance to upgrade your character card, be it adding more dice for you to throw, giving you skills to help you convert the dice you have into the dice you need, giving you one time use potions to add even more options to your dice rolling or simply to increase your characters XP enabling you to do even more of the above.

Each level of the dungeon has a time limit in which you have to explore and loot your defeated pro until you have completed 3 levels at which point you will face a boss, hoping that you have upgraded sufficiently to deal with whatever dastardly powers you are up against. Once you have beaten the boss you can move onto the next dungeon, or change character, or redo the dungeon with the same character but using a different skill set. The options are seemingly endless with One Deck Dungeon and there in lies the true success of the game.

In terms of presentation, One Deck Dungeon is extremely polished offering wonderful character design in both hero and monster cards. Dice rolling is immensely satisfying especially as you get further into the dungeon and start amassing more and more dice; it is never not fun to send between 15-20 dice sprawling across the screen with one simple tap, bouncing off each other and the edges of the screen all before they are automatically organised by colour and number in front of you. Everything is just simple to use and understand, dice can be dragged and dropped, buttons are large and easy to use, cards are clear and the iconography is simple and there’s an undo button for everything. All in all a huge success in terms of the presentation.

The biggest success though for One Deck Dungeon is just how much is included with the app and how much is available as DLC. The base game includes 6 characters and 5 dungeons, each character can be levelled up in 5 different ways which means you can potentially try to crawl the same dungeon with the same character using a different skill set 5 times. Now multiply that by the 6 starting characters and you begin to see just how much there is for you to do with One Deck Dungeon. This is all before you even consider the downloadable expansions which add 8 new characters and a bunch of new dungeons, which is a tonne of new content for an already stellar line up. This game has me coming back time and time again as I try to complete every dungeon with every character and it is a sign of how enjoyable the game is that each time it feels fresh.

While One Deck Dungeon really excels as a solo board game the app allows for a 2 player game which offers much of the same dice rolling fun as the solo iteration. Players control 2 heroes, sharing dice and decisions as well as some minor tweaks to the game. While it’s fun it does slow the game down somewhat; being able to roll your dice and quickly assign them to the monster before moving on is a joy, adding a second player to consider adds a stutter to this decision making. While this is not a deal breaker it certainly diminishes the enjoyment we have compared to the single player mode.

Thankfully the solo mode is so good it makes up for any lack of online multiplayer or the slightly slower 2 player mode on the app. Each dungeon provides a unique challenge and each boss is increasingly difficult to beat. In fact One Deck Dungeon is a challenging game which players may find surprising given it’s seemingly light look and feel. It’s not simply a case of hoping the dice roll in your favour; and although there is an amount of this, it really comes down to how you choose to build your hero, when to fight and when to flee and when to use your skills to manipulate the dice. The fact that each roll leaves you with seemingly impactful decisions is refreshing to see in a dice rolling game.

If it’s not already apparent, I’m a huge fan of One Deck Dungeon. Having not played the physical game before downloading the app I didn’t know what to expect. I started playing and then 5 hours later I looked up and realised my tablet was running out of battery and I had been dungeon crawling for half of the day. The mix of strategy and luck means that even the most optimal play can leave you disappointed but a perfect roll can save you from disaster. One Deck Dungeon is a fantastic app and one which I whole heatedly recommend to anyone looking for a challenging solo board game that doesn’t rely on AI. One for the collection for sure. 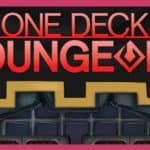