Is it worth raiding your coffers to buy this port of a recent digital board game?

Raiders of the North Sea is an interesting take on the classic mechanism of worker placement. Traditional worker placement sees you adding your workers onto places on a board in order to take an associated action; it is a tried and tested board game mechanism and is a lot of fun to play. Where Raiders of the North Sea differs is that on each turn you will not only be placing a worker on a space and performing an action but also removing a worker from a space and performing that action. It is a subtle change but one that throws up a lot of interesting dilemmas on each turn.

In Raiders of the North Sea you take charge of a hoard of Vikings preparing and ultimately performing raids on settlements, garnering victory points for being successful in battle, pillaging loot and having your brave crew members die in battle finding their way to Valhalla, the greatest honour for any Viking. The majority of your turns will be managing both your resources, your crew members as well which colour worker you have in your hand to ensure that you are able to make raids against settlements all of which have minimum requirements before you are able to raid them, be it a certain number of crew members, a certain number of resources or even a certain colour of working or all of the above.

Yes there are some more elements to Raiders of the North Sea that are interesting such as the special abilities of your crew member cards, differing depending on if you hire them to your crew or simply spend the card, a monetary system that is simple but also has you seeing diminishing returns as you try to use better coloured workers to complete the action; however it maintains the simplicity of a worker placement game and leaves the complexity to the decisions it hands to you on nearly every turn.

And here lies the true secret to Raiders of the North Sea’s success, the fact that often you will be forced to take a sub optimal move due to the fact the two actions you want to take don’t have a worker on them at the start of your turn and thus you can’t remove a worker from the space on your second turn. Either that or the fact the action you want to take on your second worker turn will leave you with a worker which is the wrong colour for the raid you want to perform. Managing these decisions as well as manipulating your turn to leave you opponents with the same problems is the key to success in this board game app.

Force your opponent into having to pause their raid by one turn gives you the chance to sneak ahead and collect those vital victory points, be held up yourself and watch as all of the settlements are raided before the turn gets back to you. And while to the untrained and inexperienced eye this game might look like a group solitaire exercise games are won and lost by these interactions between players, a sign of a good game.

In terms of presentation Raiders of the North Sea shines with it’s 3D models and the real show stealer in the character art work. The viking characters and art work is straight from the physical game which I’m pleased to see. Animations are smooth and quick and never unnecessarily over the top but add to the feel of the game. One difficulty the game has on a device is the sheer size of the board; it was always going to be a challenge to be able to clearly represent both your home base where you will be placing workers as well as display all of the places you are able to make a raid upon on one screen. Games feel like you are often scrolling back and forth all of the time to try and keep abreast of what is available for a raid as well as what the requirements are. While it looks great adding functionality such as a shortcut button for toggling between your base camp and the raiding map might have eliminated the need for all of the scrolling. It’s a minor gripe I know in a game that otherwise makes everything clear and easy to understand, especially a game which has plenty going on at once.

You have a number of single and multiplayer options for playing Raiders of the North Sea; online multiplayer can be played asynchronously as well as real time and is all handled by a lobby system. I’ve not had issues getting online and finding opponents has been relatively easy at this point. Thankfully local pass and play mode has also been included which I always see as an essential for board game apps.

Single player mode comes in the form of both casual games against the AI as well as a campaign over 10 challenges. The AI has 3 difficulties, mainly simply adding additional starting resources for the AI which while do give them a distinct advantage don’t seem to improve the overall decision making you are likely to see from the AI which is a little shame. On the harder difficulty levels the AI is a reasonable challenge however over all you will start to see yourself winning more than you lose but thankfully not enough to make the game unenjoyable. The challenges offer a little freshness to the single player mode by modifying what you are trying to achieve with each game, changing the way you approach the game. It’s a nice touch to make this available and is something I wish more board game app adaptations would include to keep games more interesting for single players.

Raiders of the North Sea offers a new and interesting take on the worker placement genre all wrapped up in a very polished package. Art style, graphics and game modes all compliment a solid and nicely deep gameplay and mean I am drawn back to Raiders of the North Sea on a regular basis. I enjoy the interplay between players, trying to be the first to raid so I get my choice of the loot without leaving myself short for some of the larger raids as the game progresses. The decision making of robbing Peter to pay Paul with your crew cards and worker placements keeps every turn interesting and gives me enough to think about without pushing me towards analysis paralysis. All in all I am a big fan of Raiders of the North Sea, it’s a great worker placement game and something I highly recommend if you are looking for a new board game app to add to your collection.

Raiders of the North Sea 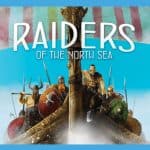