Will this stained glass themed dice roller have the staying power?

Sagrada is a dice drafting game at it’s core packaged around a stained glass window theme. Players take turns taking dice from a shared pool and placing them within their 5×4 grid (their window) obeying the placement restrictions of both their unique window as well as the rules of the game. Points are then awarded at the end for how well a player has been able to fill their window, complete 3 randomised objectives as well as maximise their single secret personal objective. It’s a relatively simple concept that sits firmly on the lighter more casual side of board game apps.

The key to the challenge of Sagrada lies in the few but impactful restrictions players have to abide by when placing dice onto their boards. Each window starts with a unique pattern of blank, coloured and numbered spaces dictating which dice can be placed within that space on the grid. This pattern is chosen from a selection of 4 offered to players at the start of the game, each with varying levels of complexity with players rewarded for taking on more difficult designs with more tokens which can be used to manipulate their windows and the dice throughout the game. While this is a limitation in itself, it’s the addition of the simple rule, no dice can be placed orthogonally adjacent to another of the same colour or number, which means that each die placement requires careful consideration from the first die to the last. Although only one square on your board may hold a number 2 restriction, it means that in order to be able to place a number 2 die in that limited square no dice placed in the 4 orthogonally adjacent squares around this space can show the number 2. Each limitation creates more limitations and as such what looks like an easy puzzle becomes a minefield of rules and restrictions.

It’s to the credit of the gameplay of Sagrada, that while all of these limitations are being spread over your window, ever multiplying, you rarely feel bogged down or unable to make some kind of move to further the completion of your stained glass window. It’s a slick game that doesn’t slow down under the weight of the ever increasingly difficult decisions it forces you to make and rushes along in about 10 minutes even with the maximum play count of 4.

The physical version of Sagrada is one which I play on regular rotation, it’s a favourite starter game for my board game night due to it’s ease of access for new players as well as it’s appealing aesthetic. So when I heard that Dire Wolf Digital would be bringing a port to our devices I was both excited and a little nervous of how they would handle a game I enjoy. I can safely say that they have handled it wonderfully and no place more so than the presentation.

A huge selling point of the physical game was the design, each player had their own brightly coloured window frame, the dice were not only colourful but transparent and so the overall effect of your completed game was a stained glass window that looked glorious. My worry in bringing this to the digital realm was losing not only the excitement of throwing a tonne of dice (who doesn’t love chucking dice around) but how the team would be able to recreate the look of Sagrada, transparent coloured dice and all.

I think it’s clear when you look at the app version of Sagrada that the presentation is one area which has been a huge success and has in fact exceeded my expectations. The colours of Sagrada pop off the screen and while graphically it isn’t breaking any new grounds it looks remarkably polished and modern. Dice placement options are made clear to you throughout and so newer players will have little to no difficulty know what they can and can’t do. Menus are simple to navigate and offer a limited but necessary number of options for you to get started with Sagrada.

While the overall app presentation is great I have experienced some minor bugs and quirks which have been frustrating but by no means a deal breaker for me. As the game cycles between players turns I have found that it can stick on an opponent’s window rather than automatically returning to my window when it is my turn. While this wouldn’t really be a big problem normally, the difficulty in swiping between your window and your opponent’s windows means it can be a little frustrating to get back to your board. Moving between windows is handled by a swipe across however it does not seem to recognise this gesture often and so I have given up looking at opponent’s boards altogether and just focusing on my own. Sagrada is a reasonably solitaire feeling game however taking a dice that your opponent needs is a factor in my decision making which in this app is not something I’m currently utilising.

Thanks to it’s thin rule book and ease of accessibility the in game tutorial is not laborious and can be completed quickly for new players. It takes you through a few turns of the game, assisting you with both placement but also limitations of placement of the dice. Other additional rules, specifically for the tool cards are well explained before each game and are expandable throughout should you forget what each one does.

When it comes to play options Sagrada features both online and offline play, with a couple of options for each. Online play is handled with both live games as well as async games via both a lobby system or by inviting friends which is found buried within the app settings. Offline play is available both solo against the AI, via a campaign or with pass and play. It’s great to see a board game app that offers all 3 of these options which is rare. The campaign mode is very light and sees you playing through a set number of boards and set ups gaining stars for winning in order to unlock further boards. There’s no real story or much progression but it’s nice to at least see an attempt at a campaign, just unusual that it comes from a game with so little story or reason for one.

Solo against an AI is a solid mode and although the AI comes in 3 difficulties I will only play on hard and even then I find that I win the majority of the time. The AI makes no glaring mistakes aside from unnecessary purchasing of tools which don’t further their dice placement, however as I have found with other Dire Wolf Digital games (Raiders of the North Sea for example) it’s not the most challenging. I would love to see a tweak to the hardest AI in order to optimise their moves more however I appreciate that accessibility for an app such as this is important to appeal to a wider board game and non board gaming audience.

As with a lot of digital adaptations of board games only the base game is developed which is often a pity. Sagrada is no exception here; the physical game has an expansion which adds additional mechanics as well as additional goals to achieve to gain victory points. It’s an expansion which adds to the gameplay as well as the player count and makes for a great addition to the game. This however is not available in this app at this time.

All in all Sagrada is a great implementation of a fun lightweight game. It looks great, it’s colourful and it’s easy to pick up and play in 10 minutes. The rules are accessible to any regardless of board game ability and it’s already proven a fun pass and play game in my household. Sagrada is a board game app I was looking forward to this year and the adaptation from Dire Wolf Digital didn’t disappoint, if you’re after a quick pick up and play dice drafting game (who isn’t?!) then Sagrada is a must buy. 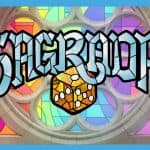