Is this a short lived area control game or will Eight Minute Empire turn into an eight hour gaming session?

Eight Minute Empire is an area control game that sees you trying to spread across the globe in about 8 minutes. It takes lots of the tropes from other area control games and strips away pretty much all of the fluff and leaves you with an empire building game as clean and sharp as it can be.

On a turn you will purchase one of the five available cards each of which has both a resource and an action. The resource goes immediately into your hand and starts a set collection with various victory points based on the volume of the resources you collect. The action can be one of 5 things, recruit, move on land, move by land or sea, kill units or build a city. Each action limits you to a certain number of these actions for instance, recruit 3 units, move 5 units by land or by sea etc. Once you have completed your action your turn is over. After 10 turns the game is over and players score based on the sets the have collected, the number of countries they have the majority control over and points for the continents they have control over the majority of countries in.

While that is the bulk of the rules there is also a bidding system to determine the start player and a limited pot of money for each player to buy cards and so you are balancing these with trying to spread your forces far and wide. Strategically there are surprising a number of routes you can take to try and win a round and all of which can work. I have won games deserting the centre of the board and quickly moving to the far corners of the globe knowing opponents won’t have the movement to be able to follow me. I have won games sailing to a new island and building a city before starting my recruitment there. I have won games collecting sets regardless of the action associated with the cards. For such a small and short game Eight Minute Empire offers a lovely level of depth without bloating the game.

Echoing the simplicity of the game itself, the presentation and graphics are simple and no nonsense. Options for your turn are clear and which player has control of what is very clear thanks to the very welcome coloured borders around both countries and continents based on which coloured player has the majorities. While nothing here is going to blow you away in the looks department, it really doesn’t need to, after all you’ll be in and out of a game before you’ve had a chance to sit down and enjoy the scenery.

Eight Minute Empire comes with both online multiplayer through a lobby system as well as pass and play. Both of these work well, especially pass and play thanks to the fact that everything in Eight Minute Empire is open and so there’s nothing to hide between players. Single player can be played with up to 4 AI players up to 3 difficulty levels. While the easy AI was a bit of a pushover the medium and hard proved a nice challenge. By the nature of the game itself the scores are often very close and one wrong move can see you falling just short of winning a game. With the additions of the Mountains expansion and additional maps all available for purchase you have a varied number of ways to play solo, all of which I’ve enjoyed.

What can I say, I like Eight Minute Empire, I like it’s simple graphics and easy to teach rules. I like seeing the colour of the country and then the continent change to my colour when I add a soldier to a new country. I like the fact that I have to make decisions on each turn which directly affects both my score but also my strategy going forward and I love the fact that I can play a game in about 10 minutes and feel satisfied. A game as streamlined as this just highlights how complicated some area control games can be (I’m looking at you Twilight Struggle) and although you won’t find the depth you find in those games here, you also won’t be able to play those games on your phone while you’re waiting for the bus. Eight Minute Empire is a success of simplicity and gameplay over complexity and scattershot mechanics. 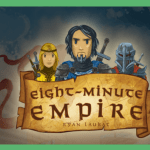