Is this board game app out of this world or should we save the space on our devices?

Terraforming Mars is an engine building game that sees you take charge of a corporation attempting to make Mars a habitable planet. It features card drafting, tile placement, resource management and set collection all in aid of big business raising Mars’s temperature, oxygen and water levels enabling them to build cities and most importantly gain victory points. The player with the most VP once Mars becomes habitable is the winner.

If you’ve played an engine builder previously you are going to recognise all the mechanics here in Terraforming Mars and will pick up the game pretty quickly. You have a number of types of resources and various ways to increase your production of these; as you produce more you can afford to take more expensive actions which in turn increase production futher. It’s a style of game that I enjoy a lot as it rewards foresight and a defined strategy, understanding early on that you are being led down a certain path and planning ahead to maximise that particular route.

Within Terraforming Mars it is the cards which lead you down these paths and are the main driver for the games development. At the start of each round, cards are drafted by each player and provide you with events and upgrades which define how your corporation will develop and what route you will take to victory. Thankfully there is a nice variety of cards available and so it always feels like an open ended game at the start before you finally hone in on your strategy for that particular game. The cards you draft might be available for you to play immediately on your turn or you may find yourself holding onto a card for many rounds while you build up your engine enough to either play it or to maximise it’s VP potential.

Aside from building your corporations resource creating engine you and your opponents are managing 3 victory condition tracks, temperature, oxygen and a stack of ocean tiles. Cards you play and actions you take will cause these tracks to increase and cause you to place ocean tiles on the board, once these reach desired levels the end game will be activated. What is more, there are a number of benefits spread along various points of these tracks rewarding the player who pushes the track past these points. This means that while it’s not essential to be the player who is moving the game forward via these tracks it can be beneficial for you to do so and although each turn increasing the temperature of Mars is one less turn improving your resource production it can lead to added VP or additional resources being added to your stores via these rewards.

While that’s an overview of what Terraforming Mars has to offer it really is a game that is in the details, th variety of cards available to you as well as the myriad of avenues to victory is what has Terraforming Mars sitting near the top of a number of best board game lists. The question is, whether this implementation of the popular board game does a good job of porting over what makes the game so well liked while managing to improve on the recipe in a way that only board game apps are able to.

First things first, Terraforming Mars looks good with some noteable caveats. The look and feel of the physical game is all there on display on the app, the Mars shaped hex board, the temperature and oxygen tracks and your player board are all there for you to see on one screen which is good to see, especially since the physical game canbe quite the table hog with it’s huge board. The iconography is clear and eimplyto understand with the icons used for various resources radically different from each other which is key when operating on smaller screens. Actions are handled by clicks and confirms which is a nice way to implement actions on a board game, while drag and drop often feels more tactile with board game adaptations, the simplicity and accuracy of clicking makes for easier game play. The main caveat I have is the size of some of the texts and icons in this game when played on smaller screens, while it’s commendable to see such a huge game on a phone it can sometimes feel cramped and a bit tricky to manage. While it’s not a huge issue it’s definitely something worth noting if you intend on playing solely on your phone.

Single player against AI, online multiplayer and solo challenge mode are available options for you should you wish to play Terraforming Mars. Single player can be up to 3 additional AI ranging from easy, medium and hard. Unfortunately the AI within the game are not a particular challenge and for experienced players you will soon find that there isn’t that much fun to be had against the AI here even on the hardest levels. I’m by no means an expert however I have played the physical game a number of times prior to the app, and even with that limited experience I soon found myself regularly winning against the AI.

Thankfully then, Asmodee Digital included the solo variant of the game under the guise of Solo Challenge; which sees you playing as a lone corporation attempting to make Mars habitable within 14 rounds. By making the game itself the opponent rather than the AI you can at least get a satisfactory play experience from an offline game and solo challenge mode is the main mode I use now when playing the game.

Online multiplayer works as you would expect, with options for random matches as well as the ability to play against your friends. Matches are available cross platform and asyncronously so you have no excuse for not jumping into a game and starting to terraform Mars.

Ok, it’s time to come clean here, I’m not a fan of the physical game of Terraforming Mars. I found it overly long (a 4 player game usually runs to about 3 hours) and the theme to be a bit of a bland take on space. No one really wants to play as an evil corportation making a planet habitable. While the game provides multiple avenues to victory, they’re not the most fun paths to be on and so it’s not a game I’m ever that enthused to play. With that being said, the app version of Terraforming Mars solves one of my biggest annoyances with the physical game, and that is the play time. Unlike the physical game, the app will take you around 30 – 40 mins to play a 4 player game which although is still on the long side, is not 3 – 4 hours playing a game you aren’t overly enjoying.

While I’m a fan of engine builders I simply didn’t gel with Terraforming Mars as a game and to add to that, the fact that it simply doesn’t run on my phone and just crashes on the loading screen means that I don’t play it as much as I probably should but it doesn’t bother me that I don’t. If I’ve got 40 minutes to sit and play a game I’m far more likely to play Through the Ages once or The Castles of Burgundy twice. Terraforming Mars looks good, speeds up gameplay and has more modes than most however a poor AI and unstable on my mobile phone are hurdles too high for it to surpass. 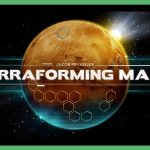