Does this adaptation of the Uwe Rosenberg polyomino game fill the void for board games on your device or does it leave a hole to fill?

Patchwork is a polyomino game from the famed designer Uwe Rosenberg, the designer who brought us highly rated games such as Caverna and Agricola. It’s a two player game which sees you and your opponent drafting oddly shaped pieces of fabric to stitch together and craft a patchworked quilt, all before you reach the end of the game track. Buttons stitched into the quilt make up the currency of the game and are used to purchase bigger and more button laden pieces for your quilt. By the time both players reach the end of the turn track the player with the most complete blanket plus the most number of spare buttons collected is crowned the winner.

It’s a terribly simple concept to pick up and learn but one that has enough strategy to keep more experienced board gamers entertained. The fact that player turn is determined by who is furthest back on the track means that there are some fun tactics to be had without feeling too cut throat a game. At it’s heart Patchwork is a combination of two player Tetris with a race game, tasking players with juggling fitting elaborate patchwork pieces into their quilt while managing how far down the track each piece takes them. You may find that a piece perfectly fits your blanket however it may take you so far down the track that it opens up your opponent to take 2 or 3 pieces while they catch up with you meaning they are able to fill their blanket more. It’s one where slow and steady can truly win the race.

The one spanner in the works for the tortoise strategy is the fact that buttons appear only on the pieces which have you moving along the track the furthest meaning that you have to choose where and when you pick up the vital in game currency without opening up opportunity for your opponent. It’s a gentle puzzle to figure out but one that is fun none the less.

The digital adaptation of Patchwork captures much of the look and feel of the physical game and adds to it with the introduction of themed menus and a user interface that borrows from the art style of the game itself. Gameplay itself is handled with a simple drag and drop mechanic and patchwork pieces snap satisfyingly to the grid making movement and placement a doddle. The whole look and feel of the app is dripping with theme, stitch marks visible everywhere and it is all complimented by a soft and soothing soundtrack that I play with turned up every time I fire up the app; unlike other apps (I’m looking at you Ticket to Ride) it gets in my head but not in an annoying way.

Single player, online and offline multiplayer are available from the off and that’s enough modes to have you enjoying the game right away. Single players compete against an AI of 3 varying levels of difficulty, while the easy level is a walk in the park the hard AI provides enough of a challenge that although I win the majority of the time it’s never a dead cert.

Online multiplayer works well and is easy to set up, there’s always players available to play and you can create games against both friends and strangers. Thankfully Patchwork includes a pass and play multiplayer which is essential for two player apps and is an option that is oft frustratingly excluded from games (see Kahuna for a two player that simply needs a pass and play game mode).

All in all Patchwork is a fun and light puzzle game that while competitive is never punishing. Thanks to the soft and squishy presentation and the cute characters and menus the game has you fully immersed in a world of stitching, sewing and blanket making. While it lacks some of the competitive edge of some other duel games such as Kahuna and 7 Wonders Duel it is a relaxing and enjoyable experience I’d definitely recommend. 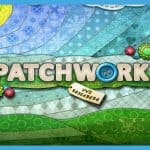