Does this game really explode off the screen or does it simply fizzle out before it gets going?

In case you are one of the few people who hasn’t heard of Exploding Kittens; it’s a push your luck card game which was a wildly successful Kickstarter. The game has you drawing cards from a deck and trying to avoid being the one who will pick up an exploding kitten card. The winner is the player who is the last one standing. It’s a really simple game which caught the imagination of the public and raised over $8 million dollars on Kickstarter, leading it to be one of the most successful campaigns on the site and throwing Exploding Kittens into the public consciousness. You can find it on the shelves of supermarkets in the UK which just goes to show how much it has made it’s way into the zeitgeist. It’s therefore no surprise that an app version of this game has made it’s way onto our devices however does it repeat the success of the physical game?

Firstly I have an admission to say, I’m not a fan of the source game. To me it was always a luck based game with little strategy wrapped up in an overly kooky kitten based packaging. I appreciate it’s place as an accessible fun party game; designed as an entry level game for the whole family. I also know that family gamers also enjoy the ‘gotcha’ mechanic which this game is all about, however I always thought that there were better games for families to pick up and play which had a more interesting mechanic without dumbing down the gameplay (Sushi Go anyone?). With all that being said it will come as no surprise that I don’t rank the gameplay high with this one however as we know, my reviews aren’t just based on that.

Exploding Kittens is simple. Each turn you are required to draw at least 1 card into your hand. If that card is an exploding kitten then you are out. What makes the game more than a simple waiting game is that the cards you draw in your hand have special abilities, be it skipping the draw card phase or making your opponent discard a card. You can play cards before the draw phase to try and push your opponent into drawing one of the elusive exploding kittens and therefore knocking them out of the game. On top of these cards there are also a limited number of ‘Defuse’ cards enabling you to not only stop an exploding kitten in it’s track but also place that kitten back into the deck at a place of your choosing; put it back on top to force your opponent to have to deal with it next turn, put it on the bottom to get your opponent to waste their cards trying to avoid it. It is this card playing that is the crux of the strategy of the game.

Compared to the physical version of the game the app Exploding Kittens is missing some of the card type which are available in the base game. No longer having the ability to play an attack card (forcing your opponent to draw two cards instead of 1 on their turn) or the ‘Nope’ card (stopping the action they attempt) means that the app differs from the original version of the game. There is the addition of some app exclusive cards however these add nothing more interesting or complicated than reversing the turn order.

When it comes to presentation Exploding Kittens looks great. It’s unique cartoon art style mirrors that of the card game and I’m a sucker for a cute cat as much as the rest of them. The controls are handled by a simple drag and drop which as always is intuitive and makes sense. The addition of the percentage meter, letting you know what the chances of you drawing an exploding kitten is a fantastic addition to the app; providing a good level of tension and is a welcome improvement compared to the card game.

Exploding Kittens as a game only really shines as a multiplayer game. It is the ‘gotcha’ mechanic of sending exploding kittens to your opponents that is the only fun element the game has and so the ability to play against the AI offers little to no enjoyment with this app. For anyone looking to enjoy the Exploding Kittens game on the go then they should look to the online mulitplayer options available rather than attempting to persevere with the basic and unchallenging (as challenging as you can be on a luck based game…) AI. Multiplayer is handled by both offline pass and play and online play against either friends (via a host code) or with strangers. While both these systems work well they have a tendency to slow down the gameplay of what is supposed to be a quick card laying game.

The game comes with a plethora of expansions which adds additional card types to the game however the cost of £1.69 – £1.89 per expansion deck is a steep price to pay for what boils down to new fun art work and a couple of new card types.

All in all Exploding Kittens is a fine implementation of a flawed game. The app looks good and runs smoothly, animations of quick and cute and the presentation additions such as the percentage meter are welcome. However my issues with this game as a board game app come not only with the flawed luck based gameplay but in the core requirement for board game apps as a whole. The most successful ports of board games into apps provide users with a way of playing their favourite board games on the move with a quicker play time (think Through the Ages), or remove annoying book keeping and car management (eg removing the shuffling in Onirim) or give you the ability to play against an AI when you can’t find people who want to play such a big game (eg The Castles of Burgundy); Exploding Kittens does none of these things. The games take longer than a normal game especially when playing pass and play, it’s such a simple game that there’s nothing which needs streamlining and playing against the AI offers very little enjoyment. It’s this flaw in the game which means that Exploding Kittens is not an app I would recommend for any but the most hardcore Exploding Kittens fan. 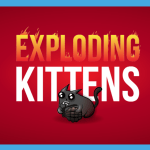