Will this digital board game age like a fine wine or will it have corked before it even began.

Viticulture is a worker placement game that sees you inheriting an Italian vineyard from you Mama and Papa, leaving you the unenviable task of getting it off the ground and producing fine wines in a race to fulfil orders and collect victory points. It’s a genre we’ve seen a bunch with board game apps such as Raiders of the North Sea and Agricola to name but a few; however there’s something different and interesting about Viticulture that worker placement games can often struggle with, tough decision making.

You set up your vineyard by placing workers on actions such as planting grapes, harvesting vines, hiring workers, building upgrades and making and selling wines to name just a few, in fact the volume of options available to you makes Viticulture quite the challenge, especially when you first start a game. These actions are split across 2 seasons, the summer planting phase and the winter harvesting phase and as such you need to figure out how many of your incredibly small portion of workers you will place top help set you up in summer while still allowing you to reap the benefits in winter. With so much to do and such a limited workforce Viticulture has you making the tough decisions from turn 1 and doesn’t stop.

Each available action can only be used twice each round by a normal worker and so you can see you best laid plans foiled by opponents ahead in the turn order filling action spots you hoped to be able to use meaning a change to your strategy on the fly. Thankfully you are never short of jobs that need doing on your vineyard and so while one avenue may be closed to you it could be a chance to use another you have been putting off till now. There’s no wasted moves in Viticulture and as such every thing you do feels like you are making strides towards a victory.

This is an extremely brief description of Viticulture the game and doesn’t come close to describing not only the nuances but also frankly some of the major elements of the game itself. I haven’t mentioned the visitor cards which you can utilise to do some pretty cool things to help you on your way, or the ageing process of both grape and wine to help you make better and more expensive wines. In fact I haven’t even mentioned one of my favourite mechanics in board games, the ability to essentially bid on turn order. At the start of each turn you are able to choose one of 7 rewards and based on all the rewards that are chosen the turn order will be set. Opt for one of the better rewards such as an extra worker that round, or an additional VP and you will find yourself at the back of the turn order, opt for one of the lesser rewards and be the first to place a worker on the board each turn. It’s a simple but effective mechanism which I have loved in games for a long time and it’s little things like this that make Viticulture a fun game.

With all of this going on you’d be right to question whether a digital port of this game can capture all of this without being blighted by rules overload, tricky AI decision making and limited screen real estate. Thankfully Digidiced’s app manages to deliver on the promise of a great physical game with their board game app adaptation of Viticulture.

The game itself looks good and uses cartoonish graphics combined with some of the artstyle of the game to provide a mish mash look which works well and more importantly manages to fit all of the information on the screen without feeling cramped, even on a phone. Action buttons are big and easy to see and everything is handled by clicking rather than dragging which makes it much easier to use. If I had one criticism of the design it would be the hand of cards you have and how they are displayed. You can see every card you have at the bottom of your screen however in order to be able to read the specifics of the action card you need to hold your finger down on a card, at which point it will display the card as well as a box containing the writing on the card. The issue is that this holding down of the card can sometimes mean your finger often obscures the writing making it hard to see what your visitor actions may be. Perhaps a one press to expand and a second press to dismiss might have worked better, especially if you are playing on a smaller screen. The fact that I’m nitpicking such a small thing just goes to show how well they have managed to bring the game to our devices and how successful the design is.

Anyone familiar with some of Digidiced’s other apps (Isle of Skye, Castles of Burgundy) will recognise the menu systems as well as the online, local and ranked game lobby set up. You have all of the usual options available to you to allow you to play online or offline with up to 6 players which is a huge play count for any game, especially one as tightly contested as Viticulture.

For those of you wanting to play against an AI are in for a real treat here. Not only do you have 3 levels of difficulty AI to face but they are incredibly difficult. The easiest AI beats me the majority of the time so I dread to think what the hard AI would do to my poor vineyard. The AI doesn’t seem to make foolish mistakes you often see from AI in board game apps which means you have to be optimising your go from the off to keep up with them. One frustration I have with the challenging AI is their stringent adherence to one strategy within Viticulture, their insistence on buying and selling fields as well as their push for singular VP at the cost of actually making and selling any wine. For a game that is based around wine it is frustrating to watch an AI player win without having to actually make any especially when every AI will try to do this if possible. It’s a valid and effective strategy but one I wouldn’t expect an easy AI to use as it’s often seen as an advanced strategy rarely seen by new players.

This powerful AI comes at a cost though, and that is the length of time it can take to make a decision on it’s turn, often AI turns can go for a minute long when there’s a lot of decisions or actions to be made. Now this could be helped by using a more powerful device than I am using (my phone) however don’t expect a game of Viticulture to be over in 15 minutes.

Fans of the physical version of Viticulture will know of the various editions and expansions for the game and so will be interested to know that while the app does not contain the Tuscany expansion which a lot of players deem vital it is a port of the Essentials edition and thus we get Mamas & Papas (although this is optional if you wish to toggle it off) as well as the updated cards and ability to buy and sell fields. Although it would be nice to see Tuscany included, I’m happy that we do at least get the Essential edition which is more than enough Viticulture for the majority of players.

With all it’s little complexities and it’s volume of actions to teach new players it’s no wonder that I struggle to get Viticulture to the table as much as I would like or with as high a play count as I would like and so the fact it’s out as a digital board game is great news in itself; but the fact that it plays as well as it does, is a challenging as it is and is as bug free as it is is truly a miracle. Viticulture is a triumph and is a fantastic port of a great game. If you’re looking for a quick pick up and play board game app you may want to look elsewhere for something lighter however if you are after a challenging, in depth and fun economic worker placement game to while away 30 – 60 minutes then you should absolutely pick up Viticulture. A must own for fans of modern gaming and for anyone who wants to play a wonderfully themed worker placement game. 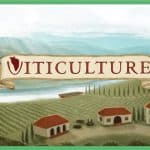